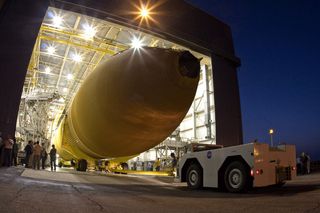 The space shuttle Discovery's External Tank-128 rolls out of the Test and Checkout Building at NASA's Michoud Assembly Facility in New Orleans en route to the Kennedy Space Center in Florida for the STS-124 mission.
(Image: © Lockheed Martin.)

ShuttleAtlantis' August mission to repair the Hubble Space Telescope might be delayedby problems with building the shuttle's redesigned external tanks.

"That possibilityexists," NASA spokesman Allard Beutel said. "Right now, we are stillofficially targeting Aug. 28, while managers do an assessment of the tankschedule."

"We're now in theprocess of building tanks from scratch instead of modifying previously builttanks. The changes and redesigns of the (external tank) have increased theamount of work required to build tanks," said John Chapman, manager of theExternal Tank Project Office.

NASA needs two tanks tolaunch the Hubble flight. A second shuttle must be poised for a rescue launchbecause Atlantis could not reach the International Space Station if damaged.

Chapman would not say whenthe tanks would be finished.

"We are stillassessing the near-term tank delivery schedule, which includes the tank for theHubble servicing mission as well as the tank for this flight's rescuemission," he said.

Engineers are evaluating ifany planned changes could be scrapped.

"Will these changesimprove performance in critical areas or just add unnecessary processing timeand complexity? That is under evaluation," Chapman said.

The tank for Discovery'sMay 25 mission is on a barge set to arrive Tuesday at Kennedy Space Center.