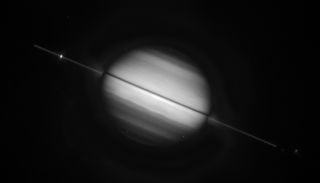 Saturn: jewel of the solarsystem, taker of breaths, ringed beauty. Even veteran astronomers can't helpbut gasp when they see her through a small telescope.

Around the world, amateurastronomers have noticed the change; Saturn's wide open rings are rapidlynarrowing into a thin line. Efrain Morales Rivera sends these pictures takenthrough a backyard telescope in Aguadilla, Puerto Rico:

"The rings havenarrowed considerably in the last year," he reports. "The Cassinidivision (a dark gap in the rings) is getting hard to see."

Four hundred years ago, thesame phenomenon puzzled Galileo. Peering through a primitive spy glass, hediscovered Saturn's rings in 1610 and immediately wrote to his Medici patrons:"I found another very strange wonder, which I should like to make known totheir Highnesses?." He was dumbfounded, however, when the rings winked outlittle more than a year later.

The same thing that'shappening now: we're experiencing a "ring plane crossing." As Saturngoes around the sun, it periodically turns its rings edge-on to Earth — onceevery 14-to-15 years. Because the rings are so thin, they can actually disappearwhen viewed through a small telescope.

In the months ahead,Saturn's rings will become thinner and thinner until, on Sept. 4, 2009, they vanish. When this happened toGalileo in 1612, he briefly abandoned his study of the planet. Big mistake:ring plane crossings are good times to discover new Saturnian moons and faintouter rings.

It'salso a good time to behold Saturn's curiously blue north pole. In 2005 theCassini spacecraft flew over Saturn's northern hemisphere and found the skiesthere as azure as Earth itself. Saturn is a planet of golden clouds, but forsome reason clouds at high northern latitudes have cleared, revealing a dome ofsurprising blue.

For years, only Cassini hasenjoyed this view because from Earth, the blue top of Saturn was hidden behindthe rings. No more: "Now that Saturn's rings are only open 8 degrees, wecan finally view its northern hemisphere's beautiful teal blue colored beltsand zones, which really did look blue through my 10-inch telescope,"reports Dan Petersen of Racine, Wisconsin, who took thispicture on Feb. 24, 2008.

Galileo never understoodthe true nature of Saturn's rings. He didn't know that they were a disk-shapedswarm of orbiting moonlets ranging in size from microscopic dust to tumblinghouses. (Scientists still aren't sure, but they may be debris from a shatteredmoon.) He didn't even know the rings were rings. Through his 17th-centurytelescope, they looked more like ears or planetary lobes of some kind.

Yet, somehow, his intuitionguided him to make a correct prediction: "they'll be back," orItalian words to that effect. And he was right. Saturn's rings opened up againand scientists resumed their study. In 1659, Christaan Huygens correctlyexplained the periodic disappearances as ring plane crossings. In 1660, Jean Chapelainargued that Saturn's rings were not solid, but made instead of many smallparticles independently orbiting Saturn. His correct suggestion was not widelyaccepted for nearly two hundred years.

Almost 27 ring planecrossings later, we still marvel at Saturn. Even with rings diminished, she isstill a breathtaking sight through the meanest of telescopes. Indeed, this is agood week to look. On Tuesday, March 18th (skymap), and Wednesday, March 19th (skymap), the nearly-full Moon and Saturn will be lined up in the same part ofthe evening sky. That makes Saturn unusually easy to find: Go outside aftersunset and look around for the Moon; Saturn is the bright golden"star" nearby.

Point your telescope and,well, just try not to gasp.

LookingAhead: If youmiss the March 18-19 encounter, try again on April 14-15. The Moon and Saturnwill be close together and the rings even narrower. Mark your calendar!