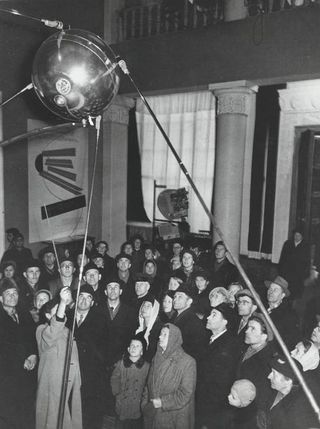 A crowd gazes upon one of seven Sputniks produced by the Soviet Union.
(Image: © History Films/Balcony Releasing)

When theSoviets launched the first manmade satellite ever into space on Oct. 4, 1957, a wave of shock and awe swept the United States and the world. Religious leaderspredicted the second coming of Christ, military leaders warned darkly of enemypropaganda and future threats, and ordinary Americans found themselvesquestioning both their nation?s standing in the world and their personal safetyin daily life.

DavidHoffman?s documentary film brilliantly captures the ?SputnikMania? that seized the United Statesat the start of the Space Age. Modern viewers can instantly relate to theuncertainty visible on American faces from the era, and the film becomes a reminderof how a single event can rattle the national psyche.

Hoffman drawson a treasure trove of news broadcasts, government reels, commercials, and somepreviously unseen or classified footage to tell Sputnik?sstory. At the time, NBC News called Sputnik ?the most important story ofthe century,? and the media flooded radio and television with wild speculationsabout what the satellite could do. Looking back on the near-hysteria providesequal parts laughter and unease.

Someexperts thought that satellite would take control of the airwaves and broadcastCommunist propaganda directly into American homes, while others predicted thethreat of nuclear bombs dropped from space. Sputnik?s launch not only ramped upon the arms race on both sides of the Cold War, but also raised the threat ofmilitarizing space just as space exploration had begun ? echoing currentconcerns regarding a space arms racewith China.

Hoffmanalso dives gleefully into the other side of Sputnik mania, when a sense ofexuberance about the new space frontier transformed much of American popculture. Teens grooved to satellite-inspired songs, and a Nobel Prize laureatewryly recalled how several friends ended up missing fingers due to theirhazardous hobbies in amateur rocket clubs.

The filmconcludes just a year after Sputnik?s launch with President Eisenhower?sdecision to create a civilian, not military, space agency called NASA in 1958.The film's hopeful end-note for the peaceful exploration of space coincideswith NASA?s celebration of its 50th anniversary this year.

?SputnikMania? opened on March 14, 2008 at the IFC Center in New York City for a two-weekrun.