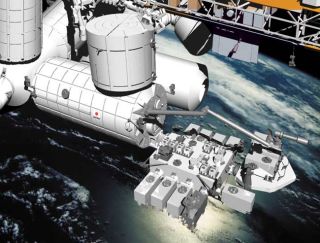 Techniciansdiscovered a faulty radio on board Endeavour during routine inspections lastweek, but mission managers cleared the system before the STS-123 space shuttlecrew arrived early this morning.

"Wewere able to exonerate the orbiter and establish that we have a goodconfiguration for flight, so that work is behind us," NASA test directorCharlie Blackwell-Thompson said of the UHF radio problem. "We're trackingno issues at this point."

The radioserves as a backup data and communications system on board the shuttle, and itsglitch was traced to a high-power amplifier. Because two low-power amplifiers arefunctioning normally, Blackwell-Thompson the need for a fix was negated.

ToddMcNamara, space shuttle weather officer, said there is a zero percent chance ofweather interfering with fueling of Endeavour's 15-story fuel tank Mondayevening, and only a 10 percent chance for scrubbing a 2:28 a.m. EDT (0628 GMT)launch attempt on March 11.

Speaking inJapanese that was translated into English, representatives of the Japan AerospaceExploration Agency (JAXA) told reporters today that they are excited to launchtheir JapaneseLogistics Pressurized module (JLP) into space.

"Wehad to adjust the plan to launch this module, but here we are today," saidYoshiyuki Hasegawa, JAXA ISS program manager, referring to the 2003 Columbia tragedy that claimed the lives of seven astronauts and severely delayed spacestation construction plans. "Finally, we are [near] the time tolaunch."

JAXAastronaut Satoshi Furukawa said he can't wait for the moment when his nation'sfirst, van-sized orbital room — one of three components for a massive orbitalscience lab called Kibo — is installed on the space station next week.

"Japan has been waiting a very long time for this moment," Furukawa told SPACE.com."I'm going to feel very proud when Takao Doiopens [the module] up and goes inside."

Planned for16 days, the STS-123 mission is vying for the title of NASA's longestattempted space station construction mission. If all goes as planned, Gorieand his crew will conduct five 6.5-hour spacewalks and safely return to Earth onMarch 26 at 8:35 p.m. EDT (0035 GMT March 27).