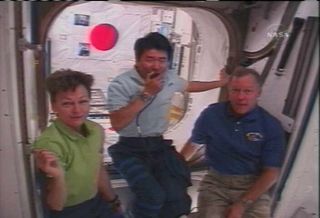 HOUSTON - When visiting someone?s house - even in space -bring food. That was Japanese astronaut Takao Doi?s motto and his country?sorbital eats are apparently a hit aboard the International Space Station (ISS).

Doi, a veteran spaceflyer who is helping deliver the first segmentof Japan?s massive Kibo laboratory to the ISS, packed three types of Japanesenoodles, some salmon and steamed rice for his crewmates aboard the shuttle Endeavourand space station.

The 10 astronauts aboard the station and shuttle sat downtogether for a joint meal early Wednesday, where they sampled Doi?s Japanesetreats.

?It was particularly good to have something different,? saidWhitson, who is nearing the end of a six-month stint as the station?sExpedition 16 commander. ?It was very tasty.?

The astronauts also swapped out one member of the station?screw and constructed a giant, Canadian-built maintenancerobot called Dextre during three spacewalks. Doi gave Fukuda and viewers inJapan a tour of the station?s new Japanese room.

The storage module is the first of JAXA?s three-segment Kibo(?Hope? in Japanese) lab, which is so massive it is being launched in pieces.The lab?s large, primary experiment module is set to launch in late May, with aporch-like external platform to follow next year.

"Thisis a Japanese home in space and we hope to utilize this,? Doi said of Kibo. ?Wehope everybody will utilize this in the future.?