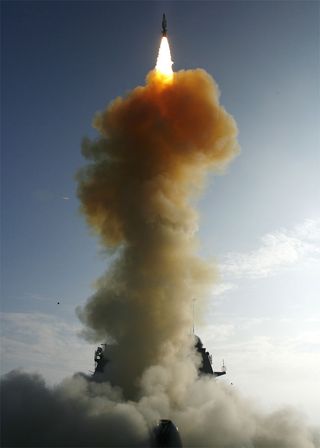 The plannedFriday launch of a new U.S. spy satellite has been delayed by space debris fromlast week?s destruction of its disabled predecessor, the mission?s launchprovider said Wednesday.

Initiallyslated for a Feb. 29 liftoff from Vandenberg Air Force Base in California, theNational Reconnaissance Office?s classified NROL-28 reconnaissance spacecraftwill stand down for at least two weeks to avoid the orbiting remains of the destroyedUSA-193 satellite, the United Launch Alliance said in a mission update.

?This is aprecautionary measure to avoid possible debris from the satellite that wasintercepted on Feb. 20,? a spokesperson for ULA, which is overseeing the newsatellite?s launch atop an Atlas 5 rocket, said in a Wednesday mission hotlineupdate.

The U.S.Navy cruiser USS Lake Erie launchedan SM-3 missile from the Pacific Ocean on Feb. 20 to destroy the defunctUSA-193, a school bus-sized classified reconnaissance satellite that failedshortly after its December 2006 launch. The satellite?s demise was a safetymeasure to prevent its half-ton load of toxic hydrazine rocket fuel fromendangering people on Earth, Pentagon officials said.

As ofMonday, the military was tracking less than 3,000 pieces ofdebris, all smaller than a football in size, from 5,015 pounds (2,275kg) satellite?s destruction, Pentagon officials said. Left unattended, at leasthalf of the satellite was expected to survive reentry to rain down on Earthnext month.

?From thedebris analysis, we have a high degree of confidence the satellite's fuel tankwas destroyed and the hydrazine has been dissipated," said U.S. MarineCorps Gen. James Cartwright, vice chairman of the Joint Chiefs of Staff, inFeb. 25 statement.

Militaryofficials said Monday that the majority of the destroyed satellite?s debris has alreadyreentered the Earth?s atmosphere or will do so in the next few weeks. Therehave been no reports of any debris fragments surviving their fiery atmosphericreentry to impact the ground, they added.

Eagerskywatchers, however, did reportsightings of what appeared to be the dead satellite?s remains in orbit.

"Wedon't think it'll be a problem, but we'll continue to analyze it to make surethat it's not a problem or a concern to us," Gerstenmaiersaid on Feb. 20, just after the space shuttle Atlantis landed earlier thatday.

The agencyactivated a backup shuttle runway in California in addition to its primarylanding site at the Kennedy Space Center in Cape Canaveral, Fla., inorder to land Atlantis and its seven-astronaut crew as soon as possible and givethe U.S. military a clear shot at the ailing spy satellite. The shuttleultimately touched down in Florida after clear weather made its backup landingstrip unnecessary.

While theU.S. Navy had modified three SM-3 missiles to make the satellite shot, thespacecraft was successfully destroyed on the first attempt.

As ofMonday, the space surveillance systems of the U.S. Strategic Command werecontinuing to monitor the remaining satellite debris to track any future riskto ground or orbital object, military officials said.