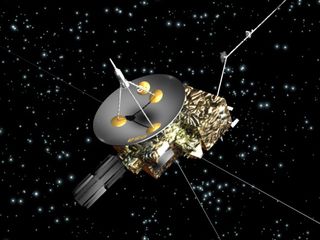 An artist's concept of the Ulysses spacecraft.
(Image: © ESA)

The Ulyssesspacecraft flew over the sun's North Pole on January 14, 2008, just a week after physicists announced the beginning of anew solar cycle.

Manyresearchers believe the sun's poles are central to the ebb and flow of thesolar cycle. When sunspots break up, their decaying magnetic fields are carriedtoward the poles by vast currents of plasma. This makes the poles a sort of"graveyard" for sunspots. Old magnetic fields sink beneath the polar surface124,000 miles deep (200,000 kilometers), where the sun's inner magnetic forcesmay amplify them for use in future solar cycles.

During themost recent solar cycle, the sun's North Pole was about 80,000 degrees or 8percent cooler than the South Pole. The most recent Ulysses flyby may helpsolve this puzzle, coming less than a year after the spacecraft's South Poleflyby in February 2007. Missionscientists will be able to compare temperature measurements, north vs. south,with hardly any time gap between them.