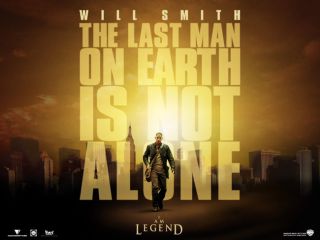 Official wallpaper for "I Am Legend."
(Image: © Warner Bros)

Wheneverthere?s a problem that threatens the entire planet, Will Smith is on the scene.Whether it?s rumbling with invading extraterrestrials ("Independence Day"),keeping neighborhood aliens in line ("Men in Black"), or corrallinganthropomorphic robots who just don?t want to get along ("I Robot"), Smith isyour ultimate white hat. Now, in "I Am Legend," he?s back in action to savehumankind from itself.

Problem is he?stoo late. As the film opens, we find Smith as the only bit of humanity left in Manhattan. He alone can enjoy the Big Apple?s urban amenities and stiff sales tax. Smith stronglysuspects he?s the only normal person on Earth (a belief he shares with many ofmy relatives).

Whathappened? Well, it?s not space aliens that are making sure no one has a niceday, nor is it androids lacking in social skills. It?s not even a trendy environmentalcatastrophe invoked by Hollywood scriptwriters to wipe the world clean of Homosapiens. It?s our own scientists, once again doing more harm than good.

The fear ofgenetically-modified food has been slightly transmogrified into a horror taleof genetically-modified medicine. Imagine this: It?s but a few years hence, andscience has conquered cancer. Yep, just one little pill, and you can stopworrying about America?s Number Two Killer. The trouble is you have to worryabout Number One—which is that little pill. Despite tests on 10,000 people,the nerds down at your local research lab have pulled a boo-boo. It turns outthere are some less-than-desirable, long-term side effects to this wonder drug,most notably death. Ninety percent of the population takes the pill, and succumbspronto. Most of the rest get turned into a cross between a vampireand a zombie. That?s an unattractive hybrid incidentally, which warps theirpersonality to that of a rabid dog, and adds insult to injury by morphing theircomplexion to that of the Borg Queen.

Well, with 6billion dead patients, you might cautiously venture that this biotech cure isworse than the disease, and the inventor is probably not going to get the NobelPrize for Medicine this year.

In fact, nomatter what you think of the Food and Drug Administration?s lack of speed inapproving new therapies, you?ll come away with a finer appreciation for their conservativetendencies after seeing this flick. Remember thalidomide? Europeans OK?ed that"wonder drug" too quickly, with horrific results. Well, this time the Americanshave been too soon seduced by a miracle cure, and—somehow—Big Pharma hasmanaged to make sure that every man, woman, and child on the planet gets theirdose of the engineered virus right away (something that hasn?t happened withAIDS medication, or even aspirin.) In reality, of course, you would think thata cure for cancer would be a pretty expensive and difficult-to-obtain drug inplaces like, oh, say rural Bangladesh. At least until the patent ran out.

OK, sothat?s a little wonky, but most of the medico stuff in this film is moderatelycredible (except, that is, for the basic premise)—due, no doubt, to the 20 orso doctors you?ll see thanked as consultants in the endless credits. Still, themutant "zompires" are surprisingly malevolent powerhouses, and—contrary toany life form you?re likely to meet in the visible universe—they have absolutelyzero tolerance for ultraviolet radiation. Even a momentary exposure to a shaftof afternoon sun is lethal. But rather than slathering on Number 500 sun block,or even just putting on more clothes, the mutants prefer to stay huddled up inhidden, indoor hives during the day, coming out at night to hunt down Smith,whom they see as nourishment. Come to think of it, that?s a bit weird, too. Plentyof wild animals cavort through the city—escapees from the zoos and the parks—but the mutants have gone completely cannibal, and ignore all this feastible beast.Maybe they?ll consider a switch to other meats once Smith has been turned tozompire chow.

"I AmLegend" is, principally, situational. Sure, Smith (a virologist who?s set up abasement lab to figure out how to beat this bad bug) occasionally busieshimself with his research, and now and then takes on the zompires. But mainlywhat he does – and what you?ll find most memorable—is enjoy New York gone toseed. It?s the Big Apple as you know it (after all, it?s only 2012), except it?sbeen without maintenance for three years. The pushy residents are gone, too.Imagine the possibilities. Imagine the lack of traffic.

And, if youcan?t do that, just sit back and feast your eyeballs on the oddly pleasantsight of Times Square overgrown with weeds. It?s "The Day After" meets "Escapefrom New York."

Well, whoknows? Maybe engineered Armageddon is in the cards. After all, doesn?t theMayan Calendar predict the end of the world in 2012? Perhaps those long-vanishednatives had some uncanny foresight about medical advances of the 21st century.