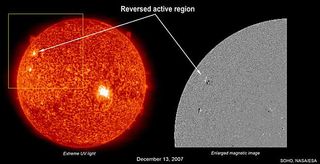 From SOHO, a UV-wavelength image of the sun and a map showing positive (white) and negative (black) magnetic polarities. The new high-latitude active region is magnetically reversed, marking it as a harbinger of a new solar cycle.
(Image: © NASA)

The sun's next cycle of increased activity might have begun last week, according to a NASA scientist.

Solar activity waxes and wanes on an 11-year cycle. During the peak, the last of which occurred in 2001 and 2002, sunspots are common and solar storms frequent. The storms, which pummel Earth with charged particles, can knock out satellites and occasionally disrupt radio and even power transmissions on the planet.

The sun has been relatively quiet for many months. Now, a modest knot of magnetism, which appeared Dec. 11, might signal the long upward trend in activity.

"This patch of magnetism could be a sign of the next solar cycle," said solar physicist David Hathaway of the Marshall Space Flight Center. "Solar minimum is upon us."

The shift would mark the beginning of Solar Cycle 24.

"Reversed polarity" means a sunspot with opposite magnetic polarity compared to sunspots from the previous solar cycle. "High-latitude" refers to the sun's grid of latitude and longitude. Old cycle spots congregate near the sun's equator. New cycle spots appear higher, around 25 or 30 degrees latitude.

The shift is not certain, however. If it's really the start of a new cycle, there ought to be a sunspot associated with the magnetic knot, but there is none. In fact, Hathaway announced a similar possible beginning to Solar Cycle 24 back in August, 2006.

Though forecasts vary wildly, some scientists predict Solar Cycle 24 will be intense. If so, "it could have significant impacts on telecommunications, air traffic, power grids and GPS systems," according to the NASA statement.

The peak is expected in 2011 or 2012. Intense storms can occur at any time in the cycle, however, though the worst is not likely to begin anytime soon.

"We still have some quiet times ahead," Hathaway said.