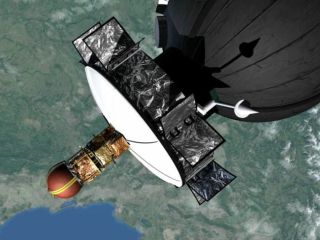 An artist's impression of YES2 attached to Foton in orbit.
(Image: © ESA)

On Sept.25, hundreds of students worldwide watched remotely as a Russian-built Foton-M3spacecraft began unwinding a 19.7-mile-long (31.7 km) super-strong space tetherno thicker than a string. The experiment's small Fotino capsule dropped from ittoward Earth, preparing to release at the right moment for re-entry into theatmosphere.

The goalwas to demonstrate a"space mail" system of delivering  packages to Earth usingjust a tether.

But theexperiment hita snag when critical telemetry sensors on the tether deployment mechanismshut down. That left the onboard computer unable to control how quickly thespace tether unwound from its spool. Early data suggested the tether reached alength of just 5.3 miles (8.5 km) before cutting the Fotino capsule loose.

"Wewere kind of disappointed by the fact," said Marco Stelzer, a missionanalyst and ground support engineer with the European Space Agency (ESA).

New telemetrydata from the Foton spacecraft saved students from a mission cliffhanger,revealing that the space tether deployment had accelerated rather than slowingdown as first thought.

"Lateron, we found out that the tether deployed to its full length, even more thanoriginally planned," Stelzer told SPACE.com.

Additionaldata from the U.S. Space Surveillance Network showed that the Foton spacecraftmoved close to a mile higher in orbit when the capsule cut free – as expectedwhen a 19.7-mile-long tether's swinging momentum that launched the capsule alsotransfers to the much heavier spacecraft.

Havingsmashed the world record for the longest man-made object flown in space, theYES2 team turned its attention to what happened with the Fotino capsule. Theonboard beacon had failed to activate and signal the capsule's final location.

"Wehave some confidence that the capsule actually came down," said Stelzer,pointing out that a full-length tether deployment would have released thecapsule back into Earth's atmosphere. A U.S.ground station in Alaska did not detect Fotino flyingoverhead after the tether release, also suggesting the capsule re-enteredinstead of continuing in a low-Earth-orbit with the Foton spacecraft.

?It mayhave burnt up on re-entry, it may have crash-landed, it may have touched downin difficult terrain somewhere in Turkmenistan, Kazakhstan or Siberia, or its radio beacon did not transmit," said RogerWalker, YES2 project manager for ESA?s Education Office, in a public statement.More information will come in the next several weeks from other experiments andsensors onboard Foton.

Whatever Fotino'sfate, the YES2 team cheered the test of the "space mail" deliverysystem using the space tether – even if the package was lost along the way.

Futurespace tethers might not only deliver parcels to Earth, but also swingspacecraft or satellites into different orbits or towards other planets.