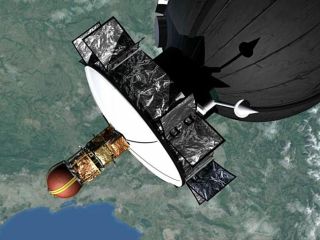 An artist's view of the tether-based payload return system "YES2" aboard the Foton-M3 capsule.
(Image: © ESA)

Sending scientificpayloads into space is expensive business, and advanced rocket systems toreturn them to Earth don't help the price tags.

On Friday Sept. 14,however, the Young Engineers Satellite 2 (YES2) will test an inexpensive "spacemail" delivery system using a pendulum-like deployment to swing alightweight payload back to Earth.

YES2, whichwillpiggyback on a Foton-M3 capsule, is scheduled to launch into space at 7:00a.m. EDT (1100 GMT) aboard a Soyuz-U rocket from Baikonur Cosmodrome, Kazakhstan. In addition to the student-built satellite, 40 experiments will be conducted aboard themain Foton capsule, including one with live geckos and newts.

?This willbe moment the YES2 team has been waiting for,? said Roger Walker, a YES2project manager with the European Space Agency (ESA). ?We hope to achieve anumber of objectives: the deployment of the 30-kilometer (18.6-mile) tether,the successful de-orbit of the lightweight re-entry capsule using the tetherrather than a rocket engine, and the survival of the capsule all the way to theground."

The magicmoment will start when spring-loaded FLOYD ejects Fotino and MASS on a tethermade of Dyneema, the world?s strongest man-made fiber. As MASS keeps the tethertaut, gravity will swing the two-piece package toward the Earth like apendulum on a string.

When Fotinoreaches a "zero" point, MASS will cut the tether and drop Fotino directlytowards the planet's surface. YES2's team of 450 students from across the globehope their 12-pound (5.5 kilogram) device, five years in the making, willsafely parachute to the arid steppes of Kazakhstan after reentry.

?If allgoes well, we should have confirmation of landing," Walker said. Shouldthe mechanism work, it could prove to be one of the most inexpensive systems toreturn an orbiting payload to the surface--a design that may be a boon toInternational Space Station experiments needing to reach eartbound scientists on a tightbudget.

The Fotoncapsule will also carry 40 experiments weighing in at 882 pounds (400kilograms). Scientists will use the results to explore fluid physics, biology,crystal growth, radiation exposure and exobiology in space.

NASA, whichhas some experiments aboard the ESA-led mission, is using the flight to testanimal biology during Foton's 12-day orbit. One experiment will monitor theeffects of microgravity on newts and geckos in aluminum containers.

"NASA'slong-term goal is to use simple, easily maintained species to determine thebiological responses to the rigors of spaceflight, including the virtualabsence of gravity," said Kenneth Souza, a project scientist at NASA Ames,said of the experiment.