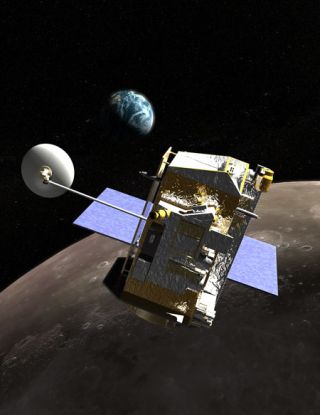 WASHINGTON-- NASA officials said Monday that they have run out of room for error as theytry to keep the agency's $700 million Lunar Reconnaissance Orbiter (LRO)mission on track for a launch next October.

"Weare holding to the October 28 launch date" for the LRO and the LunarCrater Observation and Sensing Satellite (LCROSS), which are slated to launchtogether aboard an Atlas 5 rocket, said Carl Walz,director of advanced capabilities in NASA's Exploration Systems MissionDirectorate. "Now, that is not to say there are not challenges for LRO andLCROSS. We don't have a lot of slack days with the LRO right now."

Speaking toreporters during a media roundtable, Walz saidLCROSS, an $80 million spacecraft NASA added to the LROmission to take advantage of excess launch vehicle capacity, is doingbetter schedule-wise. He said the LCROSS team has about 20 days of slack toaddress any problems that might crop up.

But some ofthe problems the LRO team is wrestling with, he warned, could affect theassembly schedules of both spacecraft. An inertial measurement unit common toboth spacecraft is "having issues," he said when asked for anexample.

Richard Gilbrech, NASA associate administrator for explorationsystems, blamed LRO's schedule worries on themagnitude of the integration job ahead for NASA's Goddard Space Flight Centerin Greenbelt, Md. He said he is keeping a "close eye" on the LRO butso far has not seen sufficient cause to slip the launch date.

Gilbrechand the head of NASA's Constellation Program, Jeff Hanley, also fieldedquestions about whether the OrionCrew Exploration Vehicle, on track for a 2015 debut, normally would land onground or splash down in the ocean off the coast of California. TheConstellation Program encompasses Orion, NASA's planned space shuttlereplacement, as well as other vehicles the space agency needs in order toreturn to the Moon by 2020.

With an Orionpreliminary design review slated for late 2008, spacecraft designers areproceeding on the assumption that Orion's normal mode of landing will be anApollo-like splashdown with only a contingency capability to touch down onland.

Gilbrechsaid that while the Constellation Program is leaning toward a water-landingscheme, because it appears safer and does not require Orion to carry 680kilograms of airbags to the Moon and back, a final decision is still at least ayear away.

"Wehave not picked a landing mode for Orion yet. Both options are still on thetable as we head into the coming year," he said.