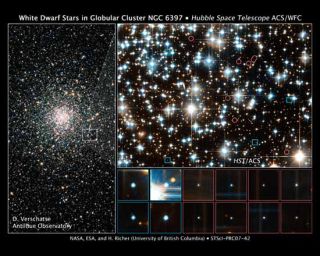 Hubble Space Telescope images of white dwarfs in NGC 6397. Young white dwarfs were found far away from the center of the globular cluster, where they were expected to be found.
(Image: © NASA)

As whitedwarfs form, they get a ?kick? that propels them to speeds of thousands ofmiles per hour, new evidence from NASA's Hubble Space Telescope shows.

Astronomersused Hubble's Advanced Camera for Surveys to look at the distribution of whitedwarfs in the ancient globular cluster NGC 6397,a dense swarm of hundreds of thousands of stars.

Becausethese stars were extremely massive before they burned out as white dwarfs, andmassive stars tend to gather at the cluster's core, astronomers assumed thatmost of the newly minted white dwarfs would dwell at NGC 6397's center.

ThroughHubble's images, however, they discovered young whitedwarfs residing at the edge of the globular cluster.

"Thedistribution of young white dwarfs is the exact opposite of what weexpected," said astronomer Harvey Richer of the University of British Columbia in Vancouver. "Our idea is that as aging stars evolve into white dwarfs,they are given a kick of 7,000 to 11,000 miles an hour (3 to 5 kilometers asecond), which rockets them to the outer reaches of the cluster."

Richersuggested that white dwarfs propel themselves by ejecting mass, just as rocketsdo. Before stars become white dwarfs, they swell up into red giants, which loseabout half of their mass by shedding it into space. If more of this mass isejected in one direction, it could propel the emerging white dwarf throughspace, Richer has proposed.

Observationsof some planetarynebulae (the glowing material ejected by red giants) show this directedoutflow, with jets projected in opposite directions. If these jets are notperfectly balanced, Richer said, the stronger jet could accelerate the whitedwarf in the opposite direction.

The ideathat young white dwarfs are born with a kick was suggested 30 years ago toexplain why there were so few of them in open star clusters.