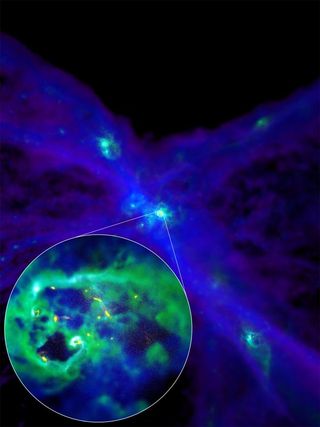 In a cosmicbattle of sorts taking place in the centers of galaxies, stellar forces muscleup and kick out brewing invisible matter. The result, finds a new study, evensout the amount of invisible matter held in galactic cores, resolving a cosmologicalpuzzle.

Theinvisible stuff, called dark matter, is thought to make up as much as 90percent of the universe's mass. Astronomers have never directly observed this mysteriousmatter, as it doesn't emit or reflect visible light or otherelectromagnetic radiation. Instead, they infer its existence based on itsgravitational effects on visible matter like stars and galaxies. (For instance,dark matter makes galaxies spin faster than otherwise expected.)

Astronomershave long tried to explain theoretical models that predict there should be muchmore dark matter in the central regions of dwarf galaxies than observationssuggest is the case.

?One ofthe most troublesome issues concerns the mysterious dark matter that dominatesthe mass of most galaxies," said Sergey Mashchenko of the Department ofPhysics and Astronomy at McMaster University in Ontario.

Maschenkoand his colleagues used supercomputer simulations to illustrate galaxyformation early in our cosmic history?about a billion years after the Big Bang,the theoretical start of the universe as we know it. The simulationsshowed the violent processes galaxies suffer at their births, when denseclouds of gas collapse to form massive stars, which then end their livesquickly as explosive supernovas.?

It is wellestablished that these massive stars can inject large amounts of energy into their galactic neighborhoodsthrough the explosions and also constant emissions of charged particles calledstellar winds. The energy can push interstellar gas to nearly sonic speed,which for gas at a typical temperature is about 6 miles per second (10kilometers per second).

Still,debate has persisted over whether this stellar feedback could turn the spike indark-matter density (predicted by theory) into the observed flat core in thecentral regions of dwarf galaxies.

Thesimulations showed that the stellar wind and explosions shock the interstellargas, pushing it back and forth like water sloshing in a cosmic bathtub. Thatsloshing kicks most of the darkmatter out of the center of a dwarf galaxy in the simulation, bringing intoagreement theoretical predictions and observations.

Theresearchers say their results, detailed online last week by the journal Science,will force cosmologists to rethink the role of interstellar gas in theformation of galaxies and could lead to a better understanding of dark matter.