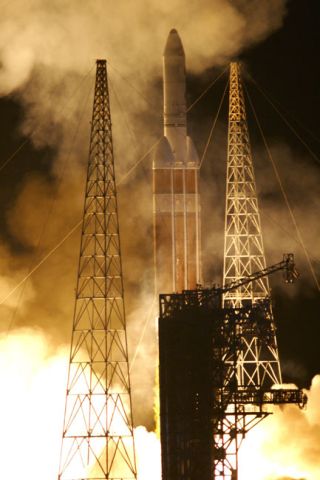 It is America's largestunmanned space booster. Its level of complexity causes engineers to liken it tolaunching three rockets at one time. And its fiery blastoffs create a dazzlingyet heart-in-your-throat sight.

But in its lone previousflight three years ago, the Heavy encountered an unexpectedproblem within its fuel lines, causing the engines to snuff out a fewseconds early and leaving the rocket well short of the intended orbit. That December2004 launch was only a test, an Air Force-financed demonstration flightdesigned to uncover the unknown flaws in the system before expensive and vitalnational security payloads were entrusted to the big booster.

"It's always better tofind a problem than to have a latent and yet-to-be-discovered (problem). That'spart of why we considered the Heavy demo such a success. It was a very subtleproblem, but we found it and we fixed it," said Col. Jim Planeaux, theDelta group commander at the Space and Missile Systems Center.

Thetest rocket was outfitted with vast amounts of data-collecting sensors tounderstand all aspects of the ascent, leading to some other changes before thefirst operational launch.

"We took a lot ofreadings on accelerations, vibrations, acoustics in the various compartments ofthe vehicle. In a few cases (we) determined that they were higher than weexpected and we either modified the hardware slightly or moved some of thecomponents to a more benign environment. We finished all of those(modifications) late last year, and we're very comfortable with the vehiclewe've got."

Rocket-maker United LaunchAlliance and the Air Force, both confident that the Heavy was ready for a realmission, fired off the rocket from Cape Canaveral in Florida at 8:50 p.m. EST(0150 GMT) Saturday evening.

Hidden inside the longmetallic nose cone rode the DefenseSupport Program 23 spacecraft, the last in a series of eye-in-the-skysatellites designed to spot enemy missile launches and nuclear explosions.

DSP satellites have beenflying since November 1970, rocketing into orbit aboard various versions ofnow-retired Titan rockets and the space shuttle. This final one -- DSP 23 --has been waiting more than two years for the new Heavy to hoist it into space.

The Delta 4-Heavy iscreated by taking three Common Booster Cores -- the liquid hydrogen-fueledmotor that forms a Delta 4-Medium's first stage -- and strapping them togetherto form a three-wide rocket, and then adding the powerful upper stage.

As the countdown enteredthe final seconds, liquid hydrogen rushed through the three RS-68 engines andthen the powerplants roared to ignition. A massive cloud of fire raced up therocket, creating a visually awesome but terrifying display. A dozen explosivebolts holding the vehicle to pad 37B detonated as clocks struck zero to freethe Heavy to begin climbing as three launch pad swing arms pulled back.

Data from the test flightshowed the ignition fireball created hot temperatures around the nose cone,leading to another change for the DSP satellite launch.

"We've done a lot ofthinking about it since (the test). It does get pretty hot up around even thepayload vents. So to mitigate that, we've added some modifications to thisparticular payload fairing to essentially keep the plume out as the vehiclerises and still allow the payload compartment to vent properly," Planeauxsaid.

"When you've got apayload that's very sensitive to contamination, we had to go through somefairly elaborate measures to ensure we were well protected there."

About 50 seconds intoflight, the center Common Booster Core's engine was throttled back to itsminimum power level of 57 percent thrust to conserve fuel that became importantlater. The starboard and port boosters continued firing at full throttle -- 102percent thrust -- through the launch's first four minutes before emptying theirliquid hydrogen and liquid oxygen propellant tanks and shutting down the RS-68engines. The boosters peeled away and plummeted into the Atlantic Ocean.

Once the outer boosterswere shed, the center stage finally throttled back up to 102 percent for morethan a minute of propulsion, consuming that fuel supply saved during the periodof reduced thrust. The stage was jettisoned about five minutes, 40 secondsafter liftoff, leaving the rocket's upper stage and payload to continue thejourney to orbit.

About 13 minutes intoflight, the upper stage completed its first burn to achieve an initial parkingorbit above Earth and entered an hour-long coast mode until it reached theextreme western Pacific Ocean northeast of Australia. That is where the RL10engine was re-ignited to reach a geosynchronous transfer orbit with a highpoint stretching 22,000 miles at its high point.

The stage then coasted inthis orbit, eventually reaching the apogee where the RL10 engine was fired fora third time starting at T+plus 6 hours, 10 minutes. The three-minute burncircularized the orbit over the equator off the western coast of South America.

At 3:09 a.m. EST, the5,179-pound DSP satellite was released from the Delta 4-Heavy rocket tocomplete the launch.

"Lastnight's successful countdown and flight culminate a tremendous amount of hardwork by the entire Air Force launch team and our industry partners.Congratulations to all who made this challenging and spectacular launch of theDSP 23 satellite a reality," Planeaux said.

"As the firstoperational launch of a Delta 4 Heavy Lift Vehicle, it marks a major milestoneaccomplishment for the EELV program and for assured access to space."

Another Heavy is next up onthe Delta 4's launch schedule. An April liftoff is planned from Cape Canaveralto deliver a classified spy satellite into orbit for the U.S. NationalReconnaissance Office.

Officials plan a five-monthgap between Saturday's flight and the subsequent launch while engineerscomplete a thorough review of data.

"That has a five-monthstandoff to digest all of the analysis and redo all of the loads for thepayload. But we look forward to not taking any more time than that to launchNROL-26," said Mark Wilkins, United Launch Alliance vice president forDelta Programs.

Another secret NRO launchusing a Heavy from the Cape is planned in 2009, followed no sooner than 2010the first Heavy flight from California's Vandenberg Air Force Base with anotherNRO payload. Outfitting of that West Coast pad to install equipment for thelarger rocket has begun.