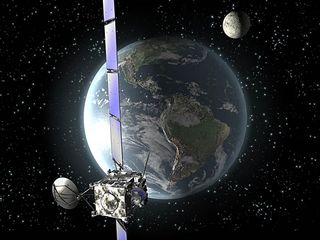 An artist's rendition of Rosetta's second close approach to Earth on Nov. 13, 2007. The swing-by is Rosetta's third major step on its 10-year journey to comet 67/P-Churyumov-Gerasimenko.
(Image: © C. Carreau/ESA)

There's aspacecraft hot on the trail of a comet, and it's swinging by Earth for a bigspeed boost on Tuesday.

Rosetta willmake a close approach to Earth on Nov. 13 to reach its final destination—comet 67/PChuryumov-Gerasimenko—about seven years from now.

The 3.3-toncomet chaser, launched on an Ariane 5 rocket by the European Space Agency (ESA) in 2004, will make theclose encounter with the planet to pick up almost 9 percent more speed, savingit fuel and hastening its journey.

Rosetta'spass occurs around 3:57 p.m. EST (2057 GMT) and will track above the PacificOcean, southwest of Chile before the spacecraft flings back on course. In 2009,Rosettais slated for another swing-by that will speed it to 86,570 mph (139,300 kph) relativeto the Sun.

Swing-bys takeadvantage of gravity to change a spacecraft?s trajectory and assist it in reachingits target. But the close encounters also soak up orbital energy: the processis like free falling toward Earth but never hitting the ground, so the gainedspeed isn't lost.

Rosetta's firstEarth swing-by took place March 4, 2005. Tuesday's encounter will slingshotthe spacecraft through the asteroid belt and enable observations of asteroidSteins, one of the mission's scientific targets.

The mission'sfinal Earth approach, set for Nov. 13, 2009, will speed Rosetta across theasteroid belt for a second time, allow the craft's instruments to scope out asteroidLutetia and finally push it ahead to meet up with comet 67/PChuryumov-Gerasimenko.

Once Rosettaencounters the wily comet in 2014, about 372,800,000 miles (600 million km)from the Sun, the spacecraft will eject a lander to park on the comet's surface for scientific study.

Rosetta'svisit to Earth this week will be poorly lit by the Sun, exposing the mission toeven more blistering cold space temperatures—increasing the risk of damage to thespacecraft's sensitive electronics.

In spite ofthis, a few experiments both on the orbiter and its lander will be activatedfor calibration, scientific measurements and imaging.

Takingadvantage of its 3,293-mile (5,301-kilometer) vantage point above Earth duringthe swing-by, Rosetta will look for shooting stars and observe the planet's atmosphereand magnetosphere.

It willalso peek at urban regions in Asia, Africa and Europe, study the Moon and takea family photo of Earth and its lunar companion from a distance.

The entireoperation will be controlled from ESA?s Spacecraft Operations Centre (ESOC) in Darmstadt, Germany.