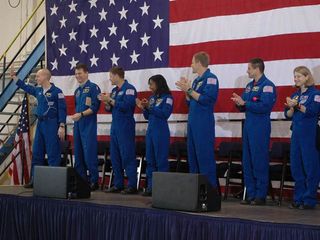 The STS-120 crew and recent ISS resident Clay Anderson take to the stage inside Hangar 276 at Ellington Field in Houston.
(Image: © collectSPACE.com.)

Just a dayafter landing from their 15-day flight aboard space shuttle Discovery, the crewof STS-120 returned home to Houstonon Thursday, where they were met by their NASA coworkers, family, friends, fansand the President of the United States George Bush.

ThePresident, in town for other meetings, met the crew at Ellington Field as theywere arriving from Florida and he waspreparing to board Air Force One for San Antonio. Their meeting was private but Michael Coats,director of Johnson Space Center,shared some of Bush's words whileintroducing the astronauts to the assembled crowd.

"Forthe last 24 hours, I've been trying to think of the right words to describethis mission and all I could come up with was 'Wow, what a terrificmission,'" said Coats, who is also a former astronaut. "I felt badabout that. I felt like after 30 years in this business, I should be able tocome up with something better than that."

"Butthis morning, when President Bush landed on Air Force One and I got to be oneof the greeters out there to say hello to him, as soon as he got off the planehe said, 'Wow, what a terrific mission.' So I think that is pretty appropriate,it truly was a terrific mission," said Coats to laughter from theaudience.

The 'terrific mission'launched on Oct. 23 to deliver the Harmony node to the International SpaceStation. The Italian-built U.S.multi-port module will allow European and Japanese science labs to be added tothe orbiting outpost. The shuttle astronauts returnedto Earth on Wednesday.

"Harmonyis just beautiful, it is an inspiration to see and it was an astronaut heaven.It was clean and bright and airy and beautiful," recalled STS-120 commanderPam Melroy speaking at her and her crew's homecoming.

Herfavorite moment from the mission however, came as a result of something thatwasn't planned when Discovery launched with her at the helm. After moving a largetruss assembly to its permanent berth, Melroy's crew began to deploy its twopower-providing solar array wings. The first array unfolded without issue. Thesecond was nearly fully extended when a tear in its blanket was spotted. Adaring spacewalk was quickly devised by flight controllers which required thecrew build a set of array-stabilizingcuff links and to use the station's 50-foot (15-meter) robot arm andthe orbiter's 50-foot inspection boom in a way never before attempted.

"Bythe end of the night before we were ready to go out, Peggy [Whitson, ISScommander] and George [Zamka, STS-120 pilot] had finished building the cufflinks, the EVA [spacewalk] and robotics teams had several tag-ups independentlyand the whole crew came together, and this really required every single personon both crews to pull their weight and more to make it happen," recountedMelroy.

"Andeveryone came together, and I just kind of hung back for a moment and listened,as everybody was talking about what needed to be done. And there were theseideas popping out of everybody's mouths. 'We have to remember this,' 'Don'tforget that,' 'We're going to do this way and that will be the safest.' It wasjust wonderful to see the team come together and I knew that that was beingreflected on the ground at the same time."

"Thatthe best of everything was coming out," continued Melroy, "theengineering, ingenuity, the teamwork but most of all the total dedication tohuman spaceflight, to allow us to pull something incredible like that off. Itwas really amazing for me, it was on overwhelming moment."

Thespacewalk itself was made by Scott Parazynski, a veteran of four earliermissions, and first-time flyer Doug "Wheels" Wheelock. Parazynski rodethe arm and boom to the site of the tear while Wheelock monitored the arrayfrom its base, advising his spacewalking partner to take caution when theelectrically-charged wing swayed close.

Wheelockwas positioned such that he could keep sight of Parazynski, which had him outof direct sunlight and remaining stationary. That led ground controllers towarn him of the temperature.

"Itwas like, 'Oh yeah, Wheels, by the way, it is going to be a little cold downwhere you are,'" Wheelock explained, "so, I appreciate all thetraining we got on the [spacesuit] because I exercised every bit of that suit.It was freezing cold down there. I exercised my glove heaters for the firsttime and went into bypass on my EMU. My teeth were chattering, but I was tryingto hold still there," confessed Wheelock.

WhileWheels was 'down there', Parazynski was up high on the station arm (SSRMS) andorbiter's boom (OBSS).

"I'dalso like to take you to the very highest branch of the tallest tree, the'treetop' as I called it, on the end of the SSRMS, coupled with the OBSS boom,coupled with a WIF [worksite interface] adapter and then a foot restraint atthe very top of all this thing, one foot away from an enormous solararray," said Parazynski. "I felt confident with Robeau [StephanieWilson] at the helm, also Dan Tani driving the arm, and knowing that brilliantmen and women here at the Johnson Space Centerhad developed all the trajectories to get me there safely."

"Afterwe had spent three, maybe four hours out there at the worksite, just anincredible sight, very intense, I was very focused, my whole universe was justthe solar array in front of me, I did a layback and looked down at Wheels and Igave him the STS-120 salute which is a fist bump, and then spiritfingers," said Parazynksi as he performed the salute. "So, it's afist bump with attitude."