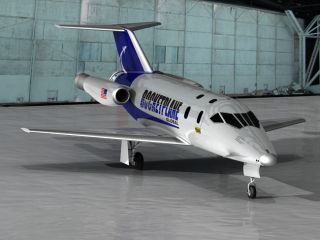 Since 2004,Rocketplane has been building their XPSpaceplane, a four-seat, fighter-sized vehiclepowered by two jet engines and a rocket engine.

But thingshave changed over the last year and a half, said Dave Faulkner, Program Managerof Rocketplane Global. "We've learned quite abit over that time and realized that we needed to make some changes," hesaid.

Faulknertold SPACE.com that both computer modeling and wind tunnel testing haveled the firm's design team to reshape their suborbital spaceship.

A key changeis that company engineers are going away from a souped-upLearjet concept. "We were changing 95 percent of the Learjet to make it arocket plane. So it was no longer a Learjet ? it just so happened that we wereusing a few Learjet parts," Faulkner said.

The vehiclenow features a new fuselage design, although, like its predecessor, the body ofthe spaceplane will be aluminum and utilize titaniumleading edges. On the craft's nose, a set of fixed canards have been added forcontrol purposes.

Anotheralteration can be seen at the spaceplane's tailsection – a T-tail instead of a V-tail is to be used, shaving off some weightwhile realizing added redundancy and extra control.

A beefierlanding gear system has also been scoped out, to be provided by LoudEngineering & Manufacturing, a CIRCOR Aerospace company located in Ontario, California.

One majorchange is use of afterburning J85 engines, with the overall thrust to weightfor the spaceplane redesign going up significantly –about 50 percent more thrust, he added.

RocketplaneGlobal has already put their money down – a still hush-hush amount of cash – and is about to take receipt of 11 of those engines from Magellan Aerospace, aCanadian company.

Here's the flightplan for suborbitalcustomers: The Rocketplane XP would take off fromthe runway at the Oklahoma Spaceport, scooting into the air just like aconventional business jet. The craft jets itself into climb mode, flying to alittle over 40,000 feet. At this point, the spaceship's pilot ignites thecraft's powerful rocket engine, pulling up into a nearly vertical climb forsoaring into space.

As the vehicle arcs over, all onboard willexperience three to four minutes of weightlessness – along with an incredibleview that only a small, select group of people have ever seen.

Within minutes, the descent begins. Under theload of several Gs pushing passengers down into their seat, they are on aunique space roller coaster ride. The XP's specially designed thermalprotection system transfers away the heat of re-entry, permitting safe, slowtravel toward terra firma.

As the Rocketplane XPslows and enters the lower atmosphere, the pilot restarts the jet engines andbegins the final leg of the flight back to the spaceport and a conventionalrunway landing.

For the inside look of the passengercabin, Rocketplane Global is engaging the talents ofFrank Nuovo, a visionary, world-class designer. He isa visionary force behind Vertu, the luxurycommunications company, and spearheaded Nokia's styling and global industrialdesign innovations.

Fee-paying flyers will be treated topersonal video screens, given the ability to pick views from different camerason the spaceship. While passengers will be provided a personal DVD of theirflight, don't be shy about stuffing your own camera in your flight suitfor taking those keepsake images of your own.

Rocketplane Global is deep in discussion withseveral investment groups, Faulkner said, "and they are getting serious ?we're progressing very well on that part."

"But we need to bring in thefinal round of investment to take the craft to flight. So that's what we'rebusy doing," Faulkner said. "I believe that we bring in theinvestment soon ? we will be in flight test and have revenue operations in2010."

Initially, the company would startout with two vehicles, forecasting a fleet of five by 2012.

"We're going to fly eachvehicle about a little over once a week. If there are no issues with thevehicle, we're going to be able to turn it around in 24-hours," Faulknerexplained. "That's the design goal right now ? and I think that's verydoable. We want to be a service provider for space transportation."

How much will a flight on the Rocketplane XP slap your wallet or cause you to dig deepinto your purse? At present, the standard rate after the first 50 FounderFlights is $200,000 per seat. That up front, right seat next to the pilot, isat a premium ticket price of $250,000 – given the wrap-around windows to gazethrough, Lauer said.

To get things rolling, quiteliterally, the current forecast is for a flight test program of 50 flights."We'll have the vehicle instrumented to the hilt ? making sure that we'renot exceeding any limits before going into operation," Faulkner added.

Asked about degree of difficulty infashioning the suborbital vehicle, Faulkner responded: "I would say it ismedium difficulty. It is certainly not easy, but I wouldn't call it hardeither. That's because we're not trying to develop new technology. That's oneof the philosophies of our company ? to use existing technology and learn fromthose people that have done it before, rather than trying to reinvent thewheel."

Working on the project are engineersthat have gone through the hard knocks of trial and error, Faulkner added. Theteam includes experts tasked to develop the space shuttle main engine, as wellas a rocket designer involved in blasting off Apollo astronauts from the Moon'ssurface once their moonwalking missions werecompleted.

To date, a little over 200,000engineering hours have been spent on the new RocketplaneXP that debuted today, Faulkner said. The company, he continued, is in negotiationwith a major airframe manufacturer, but no details as yet.

Lauer said the intent of Rocketplane Global is just that – pushing a vision thatsuch vehicles could constitute a distributed fleet flying from multiplelocations. "Having a site in Asia, Europe? being able to offer people views of their particular part of the world ispart of servicing the customer," he told SPACE.com.

Use of the vehicle to support other typesof activity has also been detailed as part of the business strategy, Lauersaid.

"We're not basing our businessplan on capturing the whole market," Faulkner noted. "I think there'senough room, at least from what we've seen, to have a few players in themarket. But I guess we'll see what happens when we get there," heobserved.

Faulkner said that the vehicle, withthe changes that have been made, "just looks right and it's also relatableto the public out there."

"It is like an airplane that happensto just pop up into space occasionally," Faulkner pointed out. "Andit just looks good."

For more information on Rocketplane Global, go to: http://www.rocketplaneglobal.com