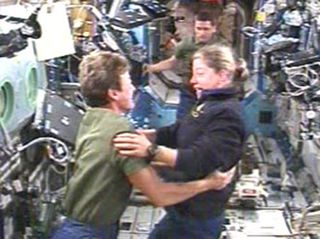 HOUSTON – Astronauts aboard the spaceshuttle Discovery will likely not have to perform a focused inspection of theirspacecraft’s heat shield, NASA said Thursday.

NASAshuttle engineers poring over recent data and images of Discovery’s heatshield have yet to find concerns that would warrant a second look at the orbiter’sheat-resistant tiles of wing edge panels, though mission managers will make thefinal decision as early as Friday.

AstronautTony Antonelli, serving as spacecraft communicator in Mission Control here atthe Johnson Space Center, radioed the good news to Discovery’s STS-120crew, which is preparing for the first of five record-tying spacewalksoutside the International Space Station (ISS). NASA’s orbiter projectteam plans to recommend that mission managers not take time from the crew’sbusy schedule this week for the extra heat shield inspection, he said.

“Ohman, that is fantastic news,” Discovery commander Pamela Melroy replied. “Wesure appreciate it. Obviously, it’s been a question that’s verymuch on our minds.”

Mission managers had set aside about threehours on Saturday for Melroy and her crew to revisit any suspect areas inDiscovery’s heat shield using sensors at the tip of a 50-foot (15-meter)extension of the shuttle’s robotic arm.

JohnShannon, head of NASA’s mission management team for Discovery’sflight, told reporters that engineers were about 90 percent complete with theiranalysis of a Wednesdayscan of Discovery’s wing edges and nose cap, and had yet tofind cause for concerns. A similar analysis of high-resolution images taken ofthe shuttle’s belly-mounted tiles as it dockedat the ISS earlier today was still under way, he said.

“Noone has seen anything that has caused any alarm or concern at all,” Shannon said of Discovery. “It’s a pretty clean vehicle.”

A smallpiece of ice that shook free from a fuel tank pipe and glanced off aft-mountedtiles as Discovery ignited its engines during a Tuesday launch also posed norisk to the orbiter, he added.

NASA haskept a close watch on shuttle heat shield integrity since 2003, when foamdamaged the Columbia orbiter’s wing leading to the loss of the spacecraftand its crew during landing.

In additionto now standard inspections just after launch, shuttle crews perform focusedscans if required and also make one final survey - dubbed a “lateinspection” - before landing to check for signs of damage frommicrometeorites or space debris.

Melroy saidthat without the extra heat shield inspection, she and her crew can focus theirattention on installing and outfitting the Harmony module. Formerly known asNode 2, the Italian-builtpressurized module will serve as the anchor for future European andJapanese laboratories at the ISS, and is the first new room to be added to thestation since 2001.

The planned6.5-hour excursion will mark the first of five planned during the STS-120 todeliver the new node, relocate a massive solar power tower, prime the ISS forfuture expansion and test shuttle repair techniques.

“We’repretty excited to hear about that because it’ll give us more time withNode 2,” Melroy said of the plan to skip the focused inspection. “Wejust can’t wait to get inside.”