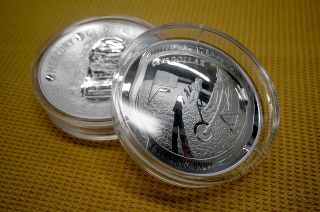 PHILADELPHIA, Pa. — The U.S. Mint has struck its initial coins commemorating the 50th anniversary of the first moon landing.

You could say it was one small strike for the Mint, one not-so-giant press for Apollo history.

"We are proud that the Mint will be producing and issuing these beautiful coins in recognition and celebration of the 50th anniversary of the first manned moon landing," said David Ryder, director of the U.S. Mint. "Here we are in the largest mint in the world and though it may not involve rocket science, we think you will be impressed with the extraordinary effort by the men and women of the U.S. Mint who have taken this coin from idea to reality."

The coins, which will be sold to the public beginning Jan. 24, 2019, in gold, silver and clad metal, are only the second in the Mint's history to be curved — one side is domed, the other side shaped like a bowl.

"These coins are a bit unique, with a distinct curve that you will be able to see and feel," said Ryder.

The coins' reverse, or tail's side, is convex, resembling the outward curve of an astronaut's helmet and feature a design based on an iconic photograph of Buzz Aldrin's visor, showing the Apollo 11 lunar module "Eagle," the American flag and Neil Armstrong on the moon's surface.

The obverse, or head's side, is concave, curving inward to the engraved image of Aldrin's boot print in lunar soil. The design also features the names of the three NASA human spaceflight programs that led up to the first moon landing: Mercury, Gemini and Apollo.

The Mint's sale of the commemorative coins will benefit the Astronauts Memorial Foundation, the Astronaut Scholarship Foundation and the Smithsonian National Air and Space Museum's "Destination Moon" gallery, scheduled to open in 2022.

"This is a big day," said Curt Brown, a former space shuttle commander and the chairman of the Astronaut Scholarship Foundation. "It is not every day you get to come down and make money. The last time I was this excited was the morning that I launched on my first shuttle mission."

Representatives from each of the benefit organizations, including Sheryl Chaffee, vice chair of the Astronauts Memorial Foundation and the daughter of Apollo 1 astronaut Roger Chaffee, and Christopher Browne, deputy director of the National Air and Space Museum, were invited by the Mint to step up to a large press and strike a coin. Also joining them representing NASA was the space agency's chief financial officer, Jeff DeWit.

Ryder said the Mint is working with NASA to arrange for one of the coins to fly in space, adding to the $14.51 in change that has previously been launched on missions into Earth orbit on the space shuttle, to the surface of Mars on board the Curiosity rover and to the farthest reaches of our solar system's planetary system on the New Horizons probe.

"So you see," explained Ryder, "the Mint has had a history of space coins that only seems fitting to continue."

The Apollo 11 50th anniversary commemorative coins are the fourth time that the U.S. Mint has honored the first moon landing on coins it has struck. The 1971 Eisenhower dollar (and later 1979 Susan B. Anthony dollar) featured the Apollo 11 mission patch on its reverse. The Ohio state quarter issued in 2002 included a depiction of an Apollo astronaut, representing Neil Armstrong. And the 2011 New Frontier medal reproduced the design of the Congressional Gold Medal awarded to Armstrong, Aldrin and Collins.

Ryder said he hopes the 2019 commemorative coins continue to inspire the public to celebrate and remember the moon landing.

"Each time a person looks at one of these commemorative coins, it will serve as a reminder of the unprecedented engineering, scientific and political achievement that secured our nation's leadership in space for generations," said Ryder.