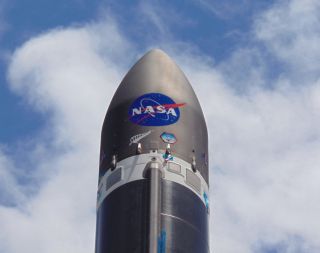 A Rocket Lab Electron booster is decked out with a big NASA logo ahead of the company's first launch for the U.S. space agency from its New Zealand launch site, on the North Island's Mahia Peninsula. Liftoff is scheduled for Dec. 12, 2018.
(Image: © Rocket Lab)

Rocket Lab is set to launch its first mission for NASA next week, just a month after acing its first commercial flight.

The California-based startup is targeting the night of Dec. 12 for the ELaNa-19 mission, which will send 10 tiny cubesats to low Earth orbit for NASA. If all goes according to plan, an Electron rocket will lift off from Rocket Lab's New Zealand launch site, on the North Island's Mahia Peninsula, during a 4-hour window that opens at 11 p.m. EST (0400 GMT and 5 p.m. local New Zealand time on Dec. 13).

There will be other opportunities if something scuttles the Dec. 12 attempt; the launch window runs through the night of Dec. 20. ["It's Business Time!" Rocket Lab's 1st Commercial Launch in Photos]

"ELaNa" stands for "Educational Launch of Nanosatellites." ELaNa-19 is a milestone mission, marking the first time that NASA cubesats have a commercial rocket all to themselves, Rocket Lab representatives said. (Tiny satellites usually have to hitch rides aboard vehicles toting big satellites as their primary payloads.)

Rocket Lab aims to greatly increase access to space using the 57-foot-tall (17 meters) Electron, which can loft about 500 lbs. (227 kilograms) to orbit on each $5 million liftoff.

The expendable rocket has flown a total of three orbital missions to date — demonstration flights in May 2017 and January 2018 (called "Just a Test" and "Still Testing," respectively) and a maiden commercial mission on Nov. 10. On that most recent flight, dubbed "It's Business Time," an Electron successfully delivered six small satellites and a "drag sail" technology demonstrator to low Earth orbit.

The 10 cubesats flying on ELaNa-19 weigh a total of 172 lbs. (78 kilograms), Rocket Lab representatives said. The small spacecraft will be deployed into a 310-mile-high (500 kilometers) circular orbit by the Electron's "kick stage."

The cubesats will gather a variety of scientific data and test various new technologies. For example, one of the spacecraft will measure radiation levels in near-Earth space, and another will demonstrate the deployment and control of a solar-sail system that could eventually help propel small probes on deep-space missions, Rocket Lab representatives said.

“Reaching orbit twice already this year has made 2018 a banner year for Rocket Lab," Rocket Lab founder and CEO Peter Beck said in a statement. "Capping it off with our first launch for NASA is a tremendous way to celebrate the new era of improved access to orbit for small satellites."

On Rocket Lab's three previous flights, the mission name also doubled as the rocket moniker. But that will change for ELaNa-19; the Electron rocket flying the mission is named "This One's for Pickering." The moniker honors Sir William Pickering, who headed the Jet Propulsion Laboratory from 1954 to 1976 and led the team that developed Explorer 1, the United States' first successful satellite. Pickering, who was born in New Zealand, died in 2004 at age 93.