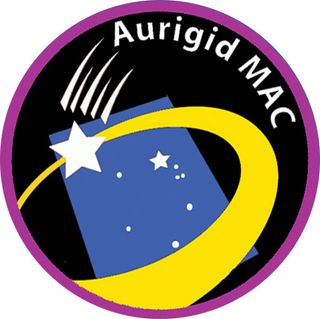 The meteorsthat are about to rain down in the early morning of September 1 date fromaround 4 A.D., the latest calculations show.

It is notoften that we can tell when a shooting star was first released from a cometinto space, to travel as a meteoroid in an orbit around the Sun, and finallycollide with Earth's atmosphere to shine as a meteor for our enjoyment.Most meteors that sporadically flash across the sky on a dark moonless nightdate from anonymous times. Only in recent years have we learned to trace youngmeteor showers, just a few revolutions old, to their date of origin.

The oldestsuch shower, but only one revolution old, is due in the early morning ofSeptember 1, 2007. Our calculations indicate Earth is about to cross the dusttrail of comet Kiess, a comet that takes some 2000 years to complete one orbitaround the Sun. The trail is very narrow, so Earth will be hosed by meteoroidsfor only about an hour and a half. The meteoroids will approach from thedirection of the constellation Auriga, the charioteer, in the north-easternpart of the sky, causing a meteor shower called the "Aurigids."

If you spotone of those meteors, you may be only the fourth person alive who is known tohave seen this meteor shower. In recent times, the shower was spotted in 1994by two observers and in 1986 by one observer.

If you arelucky enough to catch a picture of an Aurigid meteor using your digital camera,you will be the very first to do so.

Tips on howto observe meteors and where to report the results can be found at: http://aurigid.seti.org

The showeris visible from only part of the world. If you live in the western parts of the USA, Canada and Mexico, including Hawaii and Alaska, you might spot an Aurigidmeteor. Plan to step out around 4 A.M. PDT in the early morning, warmly dressedwith a blanket wrapped around your shoulders, away from city smog, with theMoon behind an obstruction, and with a wide view on the sky. Gaze up at thesky, waiting, and you may spot one of these elusive bits of matter that CometKiess lost 2000 years ago.

This isyour only chance to see this shower; the dust trail is not going to hit againin our lifetime. It is also our best chance yet to test meteor showerprediction models and look for evidence of the crust that a comet is suspectedto build up during the time it spends in the Oortcloud. Comets in shorter orbits have long lost this pristine crust.??

JonGiorgini of JPL/Caltech has identified observations of Comet Kiesswhen it returned in 1911. The orbit is now better determined than before andcalculating backwards in time puts the comet near Earth's orbit in 4 A.D., giveor take 40 years. It was at that time that the dust was released that we nowsee as meteors. The dust was ejected in wider orbits than the comet and tooksomewhat longer to return.?????

JeremieVaubaillon of Caltech calculated where the dust would end up at Earth's orbiton September 1, 2007, if it was ejected in 4 A.D. and he found that, indeed,the dust trail will be in Earth's path. The peak is expected at 11:33 UT, or4:33 a.m. PDT, give or take 20 minutes.

From pastAurigid showers, we anticipate a shower of mostly -2 to +3 magnitude meteorswith a peak Zenith Hourly Rate about 200 per hour during a 10-minute interval,with rates above 100 per hour for only 25 minutes. With a bright Moon in thesky, only 4 days past full, that translates to several tens of chances to makea wish on a meteor from around 4 A.D.?

To increaseour chances of catching these rare meteors, we will be observing the showerfrom two Gulfstream GV aircraft (flying at 45,000 ft) on a parallel flight pathfrom Wisconsin, over the Bay Area in California, and on to the Pacific in theearly morning of September 1. An international team of 24 researchers will have21 windows to aim their cameras through. The cameras are of different types,some similar to your own digital camera and camcorder, others usingtechnologies more familiar to cameras used on astronomical telescopes or thosein night vision goggles. Near the horizon, we hope to see many more meteorsthan will be visible from the ground, but each of us will be glad if the showeractually shows.

You canparticipate in this research by making an effort to photograph or film theAurigid meteors. Chances are that one of you, not us, will catch the brightestAurigid out there. Even simple cameras can provide information about how themeteoroids break apart, as each image is composed of three different images:one in blue light, another in green, and one in red. Each color tracesdifferent aspects of the meteor's light.?