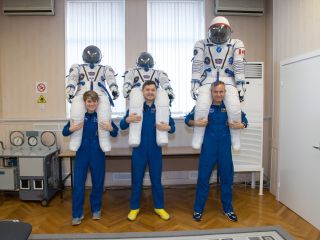 In this image, snapped Nov. 20, NASA astronaut Anne McClain, Russian cosmonaut Oleg Kononenko and Canadian astronaut David Saint-Jacques pose with the suits they will wear during their launch to the International Space Station on Dec. 3.
(Image: © NASA/Victor Zelentso)

The first crew to launch on Russia's Soyuz spacecraft since its dramatic October failure lifts off Monday (Dec. 3), and Space.com contributor Elizabeth Howell will be on the scene. Follow her journey to Moscow and then the Baikonur Cosmodrome in Kazakhstan — and tune in Monday at 6:31 a.m. EST (1131 GMT) to watch NASA astronaut Anne McClain, Canadian astronaut David Saint-Jacques and Russian cosmonaut Oleg Kononenko launch toward the International Space Station.