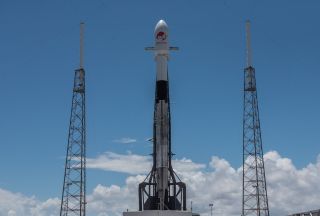 SpaceX's first "Block 5" Falcon 9 rocket booster stands on the launch pad at Cape Canaveral Air Force Station in Florida ahead of its second mission on Aug. 6, 2018. The same rocket will lift off a third time no earlier than Dec. 1, 2018.
(Image: © SpaceX)

SpaceX has once again delayed the launch of its historic SSO-A ride-share mission, which was scheduled to launch 64 small satellites on a twice-reused Falcon 9 rocket on Wednesday (Nov. 28).

Dubbed "SSO-A: SmallSat Express," the mission was scheduled to lift off from Vandenberg Air Force Base in California on a Falcon 9 rocket at 1:31 p.m. EST (1831 GMT) before landing on a drone ship in the Pacific Ocean. If eventually successful, this would be the third launch and landing of this "Block 5" Falcon 9 rocket booster — a historic first for SpaceX's reusable rockets.

But now, the rocket and its flock of small satellites will be grounded until at least Saturday (Dec. 1), according to the U.S. Air Force 30th Space Wing at Vandenberg. "The SpaceX Falcon 9 SSO-A launch is delayed due to weather," the 30th Space Wing wrote on Facebook. [SpaceX's 1st 'Block 5' Falcon 9 Rocket: The Launch Photos]

SpaceX later added in a tweet that the delay was due to extreme high altitude winds, and that the company would announce a new launch date "once confirmed with the Range."

This is the second time this month that the SSO-A mission has been delayed; an earlier launch attempt, on Nov. 19, was postponed "to conduct additional preflight inspections," SpaceX officials said. SpaceX has not yet issued a statement about today's delay.

Not only will the SSO-A mission make history by launching and landing a reusable rocket a third time, but it will also be the largest ride-share mission to launch on a U.S. rocket, according to Spaceflight, the mission management provider.

SpaceX will likely post an update on the SSO-A mission on Twitter once a new launch date is confirmed, and you can follow the 30th Space Wing on Facebook for additional weather updates and an event once a new date/time is chosen.