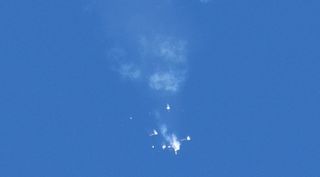 While the Roscosmos statement didn't discuss the cause of the failure, speculation has focused on a problem during the separation of four side boosters from the Soyuz rocket, which did not fall away cleanly from the core stage as seen from the ground.
(Image: © Bill Ingalls/NASA)

WASHINGTON — The final report into the launch failure that forced the abort of a crewed Soyuz spacecraft is scheduled for completion by the end of the month, the Russian state space corporation Roscosmos announced Oct. 20.

In a brief statement, Roscosmos said the state commission investigating the Oct. 11 accident met Oct. 20 and approved a "preliminary report" on the cause of the failure during the Soyuz MS-10 launch. Roscosmos did not disclose any details about the report's contents, such as what cause the investigators identified.

Roscosmos said that the final report, including recommendations to prevent a similar problem from occurring again, will be completed on Oct. 30. It didn't state when that report, or some summary of it, will be publicly released.

While the statement didn't discuss the causes of the failure, speculation has centered on a problem with one of the four strap-on boosters during staging, two minutes after liftoff. The boosters did not separate cleanly from the rocket as seen in video taken from the ground of the launch.

The Russian news service RIA Novosti said Oct. 20 that one of the boosters was not properly attached to the rocket’s core stage during assembly. According to that report, citing a "space agency source," a mounting lug was bent when the side booster was "forcefully connected" to the core stage, and that workers then added lubricant to ensure that it would separate. However, during separation, that side booster hit the core stage and damaged it, leading to the launch abort.

The Roscosmos statement did not mention when the Soyuz boosters would be approved to resume crewed flights. Russian officials have previously stated that the rocket will perform as many as three uncrewed flights, including a Progress cargo launch, before crewed flights would resume.

The next crewed Soyuz mission, Soyuz MS-11, was scheduled to launch in mid-December prior to the accident, delivering an American, a Canadian and a Russian to the station. While Russian officials have suggested that mission could be moved up to late November, no decision on that flight has been made by Roscosmos or the other International Space Station partners.

The three people currently on the ISS — Alexander Gerst of ESA, Serena Auñón-Chancellor of NASA and Sergey Prokopyev of Roscosmos — will need to return home by the end of the year, when the Soyuz MS-09 spacecraft currently docked at the ISS reaches the end of its certified orbital lifetime.

The investigation into the launch failure is going much faster than an earlier investigation into a hole found in the Soyuz MS-09 spacecraft's orbital module in late August. That hole, patched hours after its discovery, may have been caused by mishandling of the spacecraft during launch preparations.

Roscosmos officials said in early October, prior to the launch failure, said they would complete the investigation into the hole by mid-November, after cosmonauts performed a spacewalk to inspect the spacecraft's exterior. That spacewalk was postponed after the launch failure.