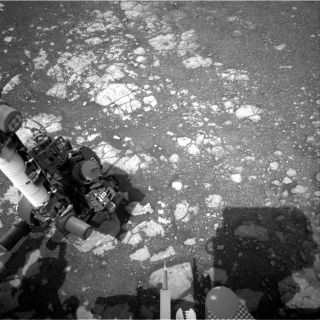 NASA's Mars rover Curiosity is putting its "new" brain to work a bit while mission team members try to fix a memory issue with the "old" one.

"I get by with a little help from my friends. Thanks to the team swapping me back to the A-side computer, I took and sent back images this week with a camera I haven't used since 2013. Work continues to get full operations back on line. https://go.nasa.gov/2OwGtcH," the mission team said yesterday (Oct. 17) via Curiosity's official Twitter account, @MarsCuriosity.

That camera, by the way, is Curiosity's "Left A" navigation camera. [Photos: Spectacular Mars Vistas by NASA's Curiosity Rover]

Like many NASA spacecraft, Curiosity launched with two redundant computers, which the team calls the A-side and the B-side. The A-side was in action when the car-size robot touched down inside the Red Planet's Gale Crater in August 2012, but it experienced a serious glitch about 200 days later that spurred a swap to the B-side.

Curiosity had been rolling along just fine with the B-side until the middle of last month, when the mission team noticed that the rover was having trouble storing the science data it gathered, and some engineering information as well.

So, about two weeks later, Curiosity switched back to the A-side, which had been patched up over the intervening years. But there will be yet another brain swap in the near future, if everything goes according to plan.

"It's certainly possible to run the mission on the Side-A computer if we really need to," Curiosity deputy project manager Steven Lee, of NASA's Jet Propulsion Laboratory in Pasadena, California, said in a statement earlier this month. "But our plan is to switch back to Side B as soon as we can fix the problem to utilize its larger memory size."

During its six-plus years on Mars, Curiosity has been assessing the planet's past ability to host microbial life and gathering data that could help scientists better understand its dramatic, long-ago climate shift, from relatively warm and wet to cold and dry.

The six-wheeled rover uncovered evidence of a long-lived, potentially habitable lake-and-stream system on Gale Crater's floor. Since September 2014, Curiosity has been exploring the foothills of Mount Sharp, a bizarre, 3.4-mile-high (5.5. kilometers) mountain that rises from the crater's center.