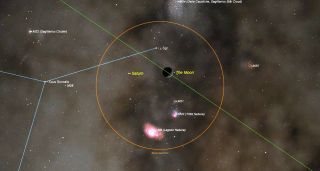 After dusk in the southwestern evening sky on Sunday, October 14, the waxing crescent moon will sit less than 2 degrees to the right of Saturn. The pair of objects will be visible together in the field of view of binoculars (orange circle) and will set at about 10:30 p.m. local time. Over the course of the evening, the moon's eastward orbital motion (green line) will carry it past Saturn. Their closest approach of 0.75 degrees, which occurs at 04:00 GMT, will be visible to observers in western North America.
(Image: © Starry Night software)

When skywatchers acquire their first telescope, I suspect there are two objects at the top of their observing list: the moon and the ringed planet Saturn.

And should the weather be clear in your area on Sunday evening (Oct. 14), beginning about 45 minutes after sunset, you'll have an opportunity to see both of these "top draw" sights, paired off about one-quarter up the south-southwest part of the sky. The moon will be in a fat waxing crescent phase, about 34 percent illuminated by sunlight. And if you look about 2 degrees to the moon's lower left, you'll see a bright "star" shining with a steady, yellow-white glow: Saturn. The ringed wonder of the solar system.

Both the moon and Saturn will be available for viewing until they set, around 10:15 p.m. in your local time zone or just under 4 hours after sunset. [Best Binoculars for Earth and Sky]

An illusion of perspective

Of course, the moon is distant from Saturn in actual miles. The moon will be 248,300 miles (399,600 kilometers) from Earth, but Saturn is 959.8 million miles (1.545 billion km) away. Simple mathematics tells us that Saturn is more than 3,865 times farther away from us compared with the moon. And yet come Sunday evening, there they will be, seemingly closely placed near one another in our early fall sky. And for those who have always had difficulty in identifying Saturn, the moon that night serves as a convenient benchmark, almost saying to astronomy neophytes: "Hey! Want to see Saturn? Here it is!"

The cratered moon: a "splendid spectacle"

The moon itself is always wonderful to look at through binoculars or a telescope. This will be especially true right along the day/night line (called the terminator). From about the middle of the lunar disk continuing right down to the lower limb, you will see a region strewn with craters, some partially in shadow and all standing out in sharp relief on the lunar surface.

Most notable will be a trio of craters. Two of those craters overlap each other: Theophilus and Cyrillius. Just below them is Catharina. In his book "Exploring the Moon through Binoculars" (McGraw Hill, 1969), author Ernest H Cherrington Jr. says: "This striking group of three major craters represents three different epochs of formation. Theophilus is a magnificent crater of recent origin, while Cyrillius is a great deal older and still older is Catharina." Cherrington adds: "They present a splendid spectacle through binoculars."

Without question Saturn is the showpiece of the solar system. The famous rings can be glimpsed by a telescope with an eyepiece magnifying 30-power or higher (though some have claimed to have seen them through high-power binoculars or simple spotting scopes) and currently they are tilted 26.5 degrees to our line of sight. The particles in the rings — numbering in the billions — range in size from specks of dust to chunks measuring about the size of a bus or a train. Each particle revolves around Saturn in its own orbit. Since the particles reflect a good deal of light, it's probable that each one is encased in water ice.

Joe Rao serves as an instructor and guest lecturer at New York's Hayden Planetarium. He writes about astronomy for Natural History magazine, the Farmer's Almanac and other publications, and he is also an on-camera meteorologist for Verizon Fios1 News, based in Rye Brook, NY. Follow us on Twitter @Spacedotcom and Facebook. Original article on Space.com.