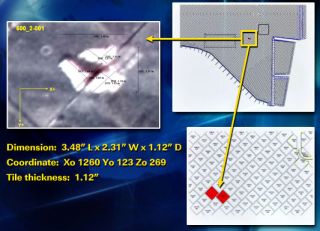 This image depicts tile damage to the space shuttle Endeavour during its Aug. 8, 2007 launch, as well as its location near the starboard landing gear door.
(Image: © NASA.)

"Wefeel like we have the culprit," Shannon said in a mission briefing here atNASA's Johnson Space Center. "I think we have conclusively shown where thepiece of foam came from."

The foampiece fellfrom a lower bracket attaching a 17-inch (43-centimeter) liquid oxygen feedline to Endeavour's fuel tank about 58 seconds after liftoff, then bounced offa metal strut to bite into two of the black ceramic tiles near the shuttle'srear right landing gear door. In addition to the gouge, the foam debris causeda series of other scuffs aft of the initial impact, Shannon said.

"Itwas bad luck because we got a bad bounce off this [external tank] strut," headded.

Because thedebris appears to be primarily made up of foam, and not denser ice asoriginally thought, mission managers are more confident that the damageinflicted is not be severe enough to require a spacewalk repair. But Shannonsaid Endeavour's astronaut crew will conduct an in-depth inspection of the tiledamage Sunday to be sure.

"If weeven have half the tile left, then we're not going to have any issues with thisat all," Shannon said.

Initialcomputer modeling, based on the assumption that the foam hit gouged deep enoughto reach close to Endeavour's aluminum skin, found that the orbiter couldreturn to Earth as is in the event of an emergency, Shannon said. The damagesite is also under a metal support strut, which would soak up excess heat ifthe underlying tile were compromised, he added.

NASA haskept a watchful eye on fuel tank foam debris and shuttle heat shield integritysince 2003, when an errant chunk of insulation breached the left wing of thespace shuttle Columbia during launch. The resulting damage allowed superheatedatmospheric gases into Columbia's left wing during reentry, leading to the loss of the orbiter and itsseven-astronaut crew.

NASA hasseen foam fall from the brackets along external tank liquid oxygen feed linesin the past, including on four of the last six shuttle missions since theagency returned its orbiter fleet to flight in 2005, Shannon said. The STS-26flight in 1988, the first to fly after the 1986 Challenger accident, returnedsafely with similar damage as that seen on Endeavour, he added.

The spaceagency found that ice can form on the flexible liquid oxygen feed line as it isfilled with the super-cold oxidizer, which is used along with liquid hydrogento fuel a space shuttle's main engines during launch. The ice can later expandto pop out nearby foam insulation, causing debris.

"It'sa little bit of a concern to us because this seems to be something that hashappened frequently," Shannon said, adding that future tanks willrely on foam-less, titanium brackets beginning with the flight just before the September 2008 launchto service the Hubble Space Telescope.

In themeantime, the likelihood that a spacewalk repair will be required for Endeavourappears to be dwindling based on the new data, Shannon said.

"Iwould say that that is much more doubtful than it was yesterday," he added.

Commandedby veteran shuttle flyer Scott Kelly, Endeavour's STS-118 mission is deliveringfresh cargo, spare parts and a new structural piece to the ISS. The missionalso marks the first flight of teacher-turned-astronautBarbara Morgan, who was selected as NASA's backup Teacher in Space in 1985and will help perform Sunday's focused heat shield inspection.