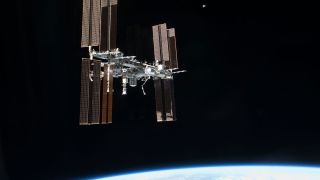 The International Space Station as seen in orbit around Earth.
(Image: © NASA)

NASA has provided an update on the continuing investigation into a small air leak aboard the orbiting laboratory that astronauts patched on Aug. 30.

Rogozin and NASA Administrator Jim Bridenstine are due to meet in person for the first time next week, a visit scheduled to coincide with the launch of cosmonaut Alexy Ovchinin and astronaut Nick Hague. The two leaders talked by video last month about the Russian investigation into the leak as well.

Today's NASA statement confirms that the investigation is ongoing, and that NASA is looking into the matter as well. "This conclusion does not necessarily mean the hole was created intentionally or with mal-intent. NASA and Roscosmos are both investigating the incident to determine the cause," the statement continued. "The International Space Station Program is tentatively planning a spacewalk in November to gather more information."

The air leak was detected on Aug. 29 after a slight drop in pressure aboard the station, which was then traced to a 0.08-inch-wide (2 millimeters) hole in a Soyuz capsule that docked to the space station in June and will remain there until October. The hole was successfully patched, and because it is in a module that does not return to Earth, it will not impact the ability of astronauts to return in December.