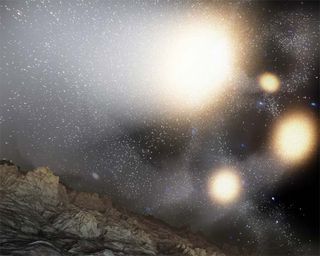 This artist's concept shows what the night sky might look like from a hypothetical planet around a star tossed out of an ongoing four-way collision between big galaxies (yellow blobs). NASA's Spitzer Space Telescope spotted the quadruple merger of galaxies within a larger cluster of galaxies located nearly 5 billion light-years away.
(Image: © NASA/JPL-Caltech/Harvard-Smithsonian CfA)

A major cosmic pileup involving four large galaxies could give rise to one of the largest galaxies the universe has ever known, scientists say.

Each of the four galaxies is at least the size of the Milky Way, and each is home to billions of stars.

The galaxies will eventually merge into a single, colossal galaxy up to 10 times as massive as our own Milky Way.

"When this merger is complete, this will be one of the biggest galaxies in the universe," said study team member Kenneth Rines of the Harvard-Smithsonian Center for Astrophysics.

The finding, to be detailed in an upcoming issue of Astrophysical Journal Letters, gives scientists their first real glimpse into a galaxy merger involving multiple big galaxies.

"Most of the galaxy mergers we already knew about are like compact cars crashing together," Rines said. "What we have here is like four sand trucks smashing together, flinging sand everywhere."

Galaxy collisions are a common occurrence in the universe. Our own Milky Way is fated to collide and merge with its neighbor, Andromeda, in about 5 billion years.

Astronomers have observed several clashes involving one big galaxy and several larger ones, and they have also witnessed more major mergers among pairs of big galaxies. But the new findings mark the first time major mergers between multiple hefty galaxies have ever been seen.

NASA's Spitzer Space Telescope serendipitously spotted the quadruple merger during a routine survey of a distant galaxy cluster, called CL0958+4702, located nearly 5 billion light years away. Spitzer's infrared eyes observed an unusually large fan-shaped plume of light emerging from a gathering of four blob-shaped elliptical galaxies. Three of the galaxies are about the size of the Milky Way, while the fourth is three times as large.

The plume turned out to be billions of elderly stars ejected and abandoned during the clash. About half of the stars in the plume will later fall back into the galaxies.

Spitzer observations also show that, unlike most known mergers, the galaxies involved in the quadruple collision are bereft of gas, the source material that fuels star birth. As a result, astronomers predict that relatively few new stars will be born in the new, combined galaxy.