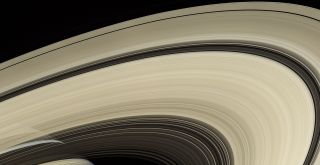 Saturn's icy rings can be seen in this image taken by the Cassini spacecraft when it was 450,000 miles (725,000 kilometers) away from the planet.
(Image: © NASA/JPL-Caltech/Space Science Institute)

An awe-inspiring photo provides a breathtaking new view of Saturn's icy rings, showing that the iconic features are translucent.

The image, taken by the Cassini spacecraft before it ended its mission by diving into the ringed planet last year, shows one section of Saturn's famous rings. Because the image was taken looking south to north, it's possible to see that the rings are actually translucent. Cassini obtained the images that make up this composite photo on April 25, 2007, at a distance of approximately 450,000 miles (725,000 kilometers) from Saturn, NASA officials said in a statement when releasing the image last week.

For 13 years, Cassini orbited Saturn, studying the planet and its moons in detail. In its exploration, the spacecraft discovered that Saturn's moons sometimes steal particles from the rings, which are made mostly of water ice, and that the rings sometimes steal particles from the moons. In fact, most of Saturn's E ring — the faint, outermost ring — consists of icy particles and gas that shoot off of the moon Enceladus as it orbits the planet, according to NASA.

The bits of ice that create Saturn's rings range in size from smaller than a grain of sand to as large as mountains, according to NASA. Saturn has seven groups of rings: four main, brighter groups and three fainter groups. The ring system extends 175,000 miles (282,000 km) from the planet, but the rings are extremely thin, at only 30 feet (10 meters) thick in most places.

The $3.9 billion Cassini mission — a collaboration among NASA, the European Space Agency and the Italian Space Agency — launched toward the ringed planet in October 1997. Since the spacecraft reached Saturn in 2004, Cassini took more than 450,000 images of Saturn, its rings and its moons, including this one and the first-ever close-up photo of the rings during the planet's equinox. Thespacecraft made its final approach to Saturn and dove into the planet's atmosphere on Sept. 15, 2017.