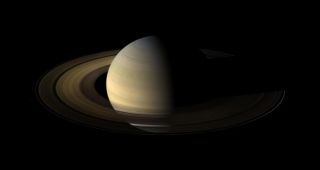 Seen from our planet, the view of Saturn's rings during equinox is extremely foreshortened and limited. But in orbit around Saturn, Cassini had no such problems. From 20 degrees above the ring plane, Cassini's wide angle camera shot 75 exposures in succession for this mosaic showing Saturn, its rings and a few of its moons August 12, 2009, beginning about 1.25 days after exact Saturn equinox, when the Sun's disk was exactly overhead at the planet's equator.
(Image: © NASA/JPL/Space Science Institute)

Once every 15 years, Saturn?s ring system is plunged into afour-day-long night, throwing the orbiting dust particles into startlingrelief.

NASA?s Cassinispacecraft observed this long night during Saturn?sequinox earlier this year, measuring the coldest temperatures ever observedfor the ring system.

The equinox observations can help astronomers betterunderstand the structure and evolution of Saturn'srings, as well as the origin of the solar system.

A section of Saturn's rings are typically in shadow at anygiven time, experiencing a brief night that lasts from six to 14 hours. Butduring equinox, that night lasts for four whole days and affects the entirering system.

Like Earth, Saturn experiences two equinoxes per orbit.During an equinox, each planet's equator lines up edge-on to its orbital plane,causing the sun to appear directly over the equator.

Of course, because Saturn is more distant from the sun, ittakes much longer to complete an orbit ? 29.5 Earth years, to be exact ? sothere is much more time between equinoxes than on Earth.

As equinox approaches, sunlight fades as the top edge of thesolar disk appears to touch the ring (from the perspective of a viewer embeddedin the rings). As the solar disk slowly crosses the rings, there is fulldarkness. Then the bottom edge of the sun rises above the ring planes, aboutfour days after the sunlight originally began to fade.

During equinox, light from the sun hits the ring particlesat very low angles, which accentuates their topography, giving a 3-D view.(While Saturn's rings are wide, they are only about 30 feet (9 meters) thick.)

Saturn's mostrecent equinox occurred on Aug. 11, and NASA's orbiting Cassini spacecraftwas there to capture the event.

Because of those low sun angles, the particles in the ringbecome very cold. Cassini's Composite Infrared Spectrometer (CRS) instrumenttook a ring temperature of minus 382 degrees Fahrenheit (minus 230 Celsius),the coldest temperature yet observed for the orbiting particles.

"The equinox is a very special geometry, where the sunis turned off as far as the rings themselves are concerned, and all energycomes from Saturn," said Michael Flasar of NASA's Goddard Space FlightCenter in Greenbelt, Md., and the principal investigator for the CRSinstrument.

The temperature of various rings changes with theirlocation.

"Because Saturn's rings are so extended, going out tomore than twice Saturn's radius (from the cloud tops), the furthest rings getless heat from Saturn than the innermost rings, so the ring temperatures atequinox tend to fall of with distance from Saturn's center," Flasar said.

Interestingly, theA-ring ? the outermost of the wide, bright rings ? did not cool off as muchas expected. This anomalous temperature could be a clue to the ring'sstructure.

"One possibility is that the gravitational influence ofmoons outside the A-ring is stirring up wave in it," said Cassini teammember Linda Spilker of NASA's Jet Propulsion Laboratory in Pasadena, Calif. "These waves could be much higher than the typical thickness of the rings.Since the waves rise above the ring plane, material in the waves would still beexposed to sunlight during the equinox, which would warm up the A-ring morethan expected."

The effort to understand the rings could also helpscientists paint a clearer picture of the origin of the solar system.

"Our solar system formed from a dusty disk, so byunderstanding the dynamics in a disk like Saturn's rings, we can gain insightinto how Earth and the other planets in our solar system were made,"Spilker said.