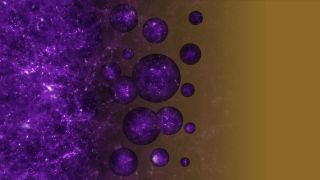 With time running from right to left, this visualization shows the formation of the first stars out of a haze of neutral hydrogen after the universe's Cosmic Dawn.
(Image: © NASA/STScI)

Perhaps the greatest revelation in the past hundred years of studying the universe is that our home changes and evolves with time. And not just in minor, insignificant ways like stars moving about, gas clouds compressing and massive stars dying in cataclysmic explosions. No, our entire cosmos has changed its fundamental character more than once in the distant past, completely altering its internal state at a global — that is, universal — scale.

Take, for instance, the fact that at one time in the foggy, ill-remembered past, there were no stars.

Before the first light

We know this simple fact because of the existence of the cosmic microwave background (CMB), a bath of weak but persistent radiation that soaks the entire universe. If you encounter a random photon (a bit of light), there's a good chance it's from the CMB — that light takes up more than 99.99 percent of all the radiation in the universe. It's a leftover relic from when the universe was just 270,000 years old, and transitioned from a hot, roiling plasma into a neutral soup (with no positive or negative charge). That transition released white-hot radiation that, over the course of 13.8 billion years, cooled and stretched down into the microwaves, giving us the background light that we can detect today. [Cosmic Microwave Background: Big Bang Relic Explained (Infographic)]

At the time of the release of the CMB, the universe was about one-millionth its present volume and thousands of degrees hotter. It was also almost entirely uniform, with density differences no bigger than 1 part in 100,000.

So, not exactly a state where stars could happily exist.

In the millions of years following the release of the CMB (affectionally known as "recombination" in astronomy circles, due to a historical misunderstanding of even earlier epochs), the universe was in an odd state. There was a persistent bath of white-hot radiation, but that radiation was quickly cooling as the universe continued its inexorable expansion. There was dark matter, of course, hanging out minding its own business. And there was the now-neutral gas, almost entirely hydrogen and helium, finally released from its struggles with radiation and free to do as it pleased.

And what it pleased to do was to hang out with as much of itself as possible. Thankfully, it didn't have to work very hard: In the exceedingly early universe, microscopic quantum fluctuations enlarged to become merely small differences in density (and why that happened is a story for another day). These tiny density differences didn't affect the greater cosmological expansion, but they did impact the lives of that neutral hydrogen. Any one patch that was slightly denser than average — even by a tiny, tiny bit — had a slightly stronger gravitational pull on its neighbors. That enhanced pull encouraged more gas to join the party, which amplified the gravitational tug, which encouraged even more neighbors and so on.

Like loud music at a house party acting as a siren song to encourage more revelers, over the course of millions of years the rich gas got richer and the poor gas got poorer. Through simple gravity, tiny density differences grew, building the first massive agglomerations of matter and emptying out their surroundings.

Somewhere, someplace, some chunk of neutral hydrogen got lucky. Piling layers upon overwhelming layers on itself, the innermost core reached a critical temperature and density, forcing the atomic nuclei together in a complicated pattern, igniting in nuclear fusion and converting the raw material into helium. That ferocious process also released a little bit of energy, and in a flash the first star was born.

For the first time since the first dozen minutes of the Big Bang, nuclear reactions took place in our universe. New sources of light, dotting the cosmos, flooded the once-empty voids with radiation. But we're not exactly sure when this momentous event occurred; observations of this epoch are exceedingly difficult. For one, the vast cosmological distances prevent even our most powerful telescopes from observing that first light. What makes it worse is that the early universe was almost entirely neutral, and neutral gas doesn't emit a lot of light in the first place. It's not until multiple generations of stars glue themselves together to form galaxies that we can even get a dim hint of this important age.

We suspect that the first stars formed somewhere within the first few hundred million years of the universe. It's not much later that we have direct observations of galaxies, active galactic nuclei and even the beginnings of clusters of galaxies — the most massive structures to eventually arise in the universe. Sometime before them the first stars had to arrive, but not too early, because the hectic conditions of the infant universe would have prevented their formation.

Although the upcoming James Webb Space Telescope will be able pinpoint early galaxies with excellent precision, offering a wealth of data on the early universe, the telescope's narrow field of view won't give us the whole picture of this era. Scientists hope that some of the earliest galaxies might contain remnants of the very first stars — or even the stars themselves — but we'll have to wait and (literally) see.

The other way to unlock the cosmic dawn is through a surprising quirk of neutral hydrogen. When the quantum spins of the electron and proton randomly flip, the hydrogen emits radiation of a very specific wavelength: 21 centimeters. This radiation allows us to map out pockets of neutral hydrogen in our modern-day Milky Way, but the extreme distances to the cosmic dawn era pose a different challenge altogether.

The trouble is that the universe has expanded since that long-dead era, which causes all intergalactic radiation to stretch out to longer wavelengths. Nowadays, that primordial neutral hydrogen signal has a wavelength of around 2 meters, placing the signal firmly in the radio bands. And many other things in the universe — supernovas, galactic magnetic fields, satellites — are quite loud at those same frequencies, obscuring the faint signal from the universe's early years.

There are several missions around the globe trying to home in on that juicy cosmic- dawn signal, dig out its primordial whisper from the present-day cacophony, and reveal the birth of the first stars. But for now, we'll just have to wait and listen.

Learn more by listening to the episode "What awoke the cosmic dawn?" on the Ask A Spaceman podcast, available on iTunes and on the Web at http://www.askaspaceman.com. Thanks to Joyce S. for the questions that led to this piece! Ask your own question on Twitter using #AskASpaceman or by following Paul@PaulMattSutter and facebook.com/PaulMattSutter. Follow us @Spacedotcom, Facebook and Google+. Original article on Space.com.