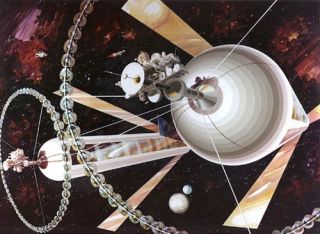 "War is not healthyfor children and other living things" goes the 60's poster.

It's true -- and yet westill fight wars. Why? Because war serves several important functions. One ofthe most important is to gain or preserve control of resources, particularlyterritory. For example, the European desire to expand in the 15th through 20thcenturies could only take place on Earth, and inevitably sparked a long seriesof wars both in and out of Europe, culminating with the vast trench-warfareslaughter of World War I. Today there is an entirely peaceful and far morepowerful alternative, space settlement. Space settlementis to territorial and resource wars as computer word processing is to the quillpen. Sure, you can write a book with a quill and ink pot, but why bother whenyou've got a PC and MS Word?

Space settlement meanspeople livingand working beyond Earth, not only on the Moon and Mars, but also in giantrotating spacecraft -- orbital space settlements.

In the 1970's Princetonphysicist Gerard O'Neill, with the help of NASA Ames Research Center andStanford University, showed that we can build giantorbiting spaceships and live in them [reference].These settlements can be wonderful places to live; about the size of aCalifornia beach town and endowed with weightless recreation, fantastic views,freedom, elbow-room in spades, great wealth and true independence. Territorialand resource wars can be made obsolete by space settlement because of onesimple fact: the vast majority of the resources available to mankind are not onEarth, they are in space. While exploiting space resources will be monumentallyexpensive, this cost is minor compared to the cost of war. A really first-classspace settlement program might cost $100 billion a year, whereas the U.S.military budget is about $600 billion. Moreover, space settlement can deliverfar, far more resources than even the most successful imaginable Earth-boundmilitary.

Spacesettlement can make resource wars a thing of the past, something we only readabout in history books, because space settlement can deliver far, far moreresources at far, far less cost. Less money, less death, less destruction, andinfinitely less stupidity.

(1) This works because mostof the mass of space settlements is in the hull, not filling three-dimensionalspace. The hull is very thin compared to a planet or large asteroid so uses farless mass for the same living area. Rotation is used to provide a feelingsimilar to gravity with far less mass.

AlGlobus serves on the National Space Society Board of Directors and is a seniorresearch associate for Human Factors Research and Technology at San Jose StateUniversity at NASA Ames Research Center.