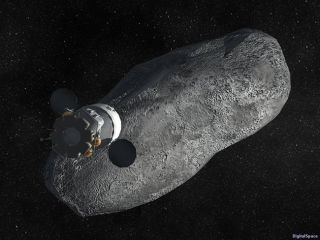 GOLDEN, Colo. – NASA's Constellation Program – including thedeployment of the Orion crew vehicle replacing the space shuttle – will firstbe assigned to International Space Station flights, then propel humans andcargo to the Moon. Expeditionary missions to Mars and beyond will follow.

But there's ongoing discussion of mounting a piloted missionto an asteroid – a voyage by astronauts to a near-Earth object,termed NEO for short. These proponents feel certain of the scientific payofffrom reaching, first-hand, an asteroid – perhaps even becoming able to exploitthese chunks of celestial flotsam to further humankind's plunge into thecosmos.

Space technologists argue that a NEO trip could be avaluable shakeout of people, equipment, and procedures prior to hurlingastronauts beyond the Moon to the distant dunes of Mars.

For others, NEOs are viewed as downright dangerous, in termsof a head-on collision between Earth and a space rock. It's best to get to knowthese incoming beasts ahead of time.

Internal looks by a small group of NASA"NEOphytes" have projected that a human trek to one of thosemini-worlds may involve two or three astronauts on a 90 to 120-day spaceflight,including a week or two week stay at the appointed asteroid.

Dispatching astronauts to a NEO is a sensible idea, saidHarrison Schmitt, Apollo 17 astronaut, geologist and current chair of the NASAAdvisory Council (NAC).

In fact, the Exploration and Space Operations subcommitteesof the NAC were briefed July 18 by NEO study team members from the NASA Johnson Space Center, although there has been no Council action on the topic.

Schmitt told SPACE.com: "I think examination of a NEOmission and the development of the stand-by monitoring systems, plans,protocols and procedures for the diversion of a potentially Earth-impactingasteroid would be very prudent activity for the U.S. to undertake."

Additionally, Schmitt said that a NEO mission would be apotentially important demonstration of the versatility and capability of theConstellation systems and a "gap-filler" before any Mars landingmission.

"So far, the arguments for asteroid science andresources are interesting, but not well-developed or potentially ashistorically or politically persuasive as a demonstration of long-term Earthdefense," Schmitt said.

At this point in time, NASA has not issued any formalrequirements to augment the Orionspacecraft to handle a piloted NEO mission, explained John Stevens,Director of Business Development for the human spaceflight line of work atLockheed Martin Space Systems, near Denver, Colorado.

However, the company – builder of the crew-carrying Orionspacecraft – internally funded two years worth of studies to flesh outtechnologies to support a diversity of destinations, Stevens said. For sojournsto a near-Earth asteroid, he said, future block upgrades to Orion arenecessary.

"It's not that difficult from an architecture point ofview to fly by an asteroid and then come back," Stevens said. But pullingoff a rendezvous and docking with such an object, then rocketing back to Earth,requires more propulsion oomph, he noted, along with the need for larger livingquarters for transiting crews, as well as recycling hardware to handle oxygenand water needs.

Also, any roundtrip – Earth-to-NEO-to Earth – is an extendedflight, way beyond that required for Moon travel. So that brings up crewpsychological-sociological issues. "It's a concern?but we don't know howmuch of a concern," Stevens advised.

Stevens said that the near-Earth object human mission can beviewed as an intermediate step between a Moon mission and a Mars mission."In terms of complexity and the length of time that you have to stayout?it does represent a good stepping stone between the kinds of missions youdo at the Moon and the kinds of missions that you next bite off?which is theMars mission," he said.

DigitalSpace, a privately held company based in Santa Cruz, California, has just released a design simulation of a notional crewedmission to an as-yet identified asteroid.

"This visualization is DigitalSpace's design conceptfor the mission, produced as an independent effort for the benefit of aninternal NASA feasibility study completed in 2007," said Bruce Damer, founderof the company that provides leading edge Internet content and tools forcommunication, collaboration, and visualization.

The NASA study was performed to show that such a mission ispossible with the new Constellation architecture, Damer said. DigitalSpacereceived input from numerous experts inside and outside NASA to produce the NEOmission visualization.

"It is important to note that this is not a NASAconcept, nor has NASA given it any kind of technical blessing?it is a designcreated by the DigitalSpace team to stimulate discussion in the spacecommunity," Damer emphasized.

Indeed, many in the space community see any pilgrimage to anasteroid – by either robots or astronauts – as having multiple benefits.

Tooling up for NEOs

Learning about NEOs offers much in both scientific andpractical terms. That's the perspective offered by Clark Chapman, a planetaryscientist at the Southwest Research Institute's (SwRI) Department of SpaceStudies in neighboring Boulder, Colorado.

The reasons are many, Chapman said: Because there are manyof them, because they are made of materials both common and exotic comparedwith materials available near the Earth's surface, and because they havenegligible gravity?they are an obvious source of raw materials for future humanexploration of outer space.

Tooling up for NEOs is already being tackled by specialistsat Ball Aerospace & Technologies Corporation, also in Boulder. They havebeen looking into a small, low-cost landing probe design that couldcharacterize both the surface and interior of small solar system objects, suchas an asteroid.

The device is about the size of a basketball and weighs justa few pounds, said Dennis Ebbets, Senior Business Development Manager for BallAerospace's Space Science division. He and staff consultant, Richard Reinert,along with Rich Dissly, Ball's Deputy Director for Solar System AdvancedSystems, suggest that several of the probes could be hauled to a target objectand deployed individually.

Once released, these non-propulsive surface probes wouldfreefall onto an asteroid's surface and begin transmitting results from theirrespective locales. The probes are outfitted with deployable panels to ensureself-righting to begin their errands.

While asteroid surface probes could be deployed from anautomated spacecraft, they are also a "perfect candidate" to be totedonboard a human expedition to a near-Earth object, Ebbets told SPACE.com.

Ebbets said asteroids deserve attention to help figure outwhat they are, where they come from, why they are different, and why there arefamilies of these objects that are the same.

Additionally, "there's a non-zero chance of being hitby one of these things," Ebbets noted. He said he was a big fan ofdropping a transponder onto an asteroid that's been branded as a potentialtroublemaker.

"Putting a transponder on it would be an excellentthing to do," Ebbets added. "You can get a very, very accurateorbit?predict years into the future whether it's on a collision course with usor not."

Along with the need to come to grips with scalawag asteroidsthat could harm Earth, SwRI's Chapman senses other NEO exploration outcomes.

?"Though I am a space scientist strongly orientedtoward the cost-effective robotic exploration of the solar system, I also grewup on science-fictional accounts of human expansion into the cosmos, and Iendorse that more expensive ? but ultimately inevitable ? direction for humanexploration," Chapman said.?

Chapman said that it makes sense to him that NEOs could beused as "way-stations" to Mars. "Human visits to NEOs can gopart-way toward understanding the challenges of going to Mars, yet not invokethe most serious challenges," he said.

Regarding concerns in some quarters that efforts to sendhumans to NEOs may be a distraction from the main, early focus of sendinghumans to the Moon, Chapman said: "In the current environment where the?Vision' dominates NASA and the budget tends to restrict what we might do underthe umbrella of the ?Vision' to the narrowest aspect of the ?Vision'?the focusmust be on the Moon."

More than the Moon

But Chapman continued by noting that the dreams of peopleworldwide who want to expand their long-delayed expectations of going intointerplanetary space, NASA – assisted by the budgetary processes in theCongress – must find a way to do more than just return to the Moon.?

"I happen to believe that scientific exploration of theMoon?could be extremely significant. And the Moon is much more easily exploredand developed than Mars, which must remain a longer term challenge. But NEOsoffer a special, practical, and inspiring challenge that we should keep on thetable," Chapman explained to SPACE.com.

In the context of the hazard ofdestructive impacts by NEOs on the Earth, Chapman said that"everything we can learn about the physical nature of NEOs canincrementally enhance our chances of dealing effectively with one, should onebe discovered that seriously affects us." He explained that roboticexploration of such a NEO would be essentially as good as human exploration ofthat threatening object.

"But the generic exploration of NEOs – even if solelyin the goal of getting to Mars ? can have side benefits not only forunderstanding the range of issues we might have in dealing with a threateningNEO, but also in learning how we might mine the resources of NEOs for futureuse in human exploration of the solar system," Chapman concluded.