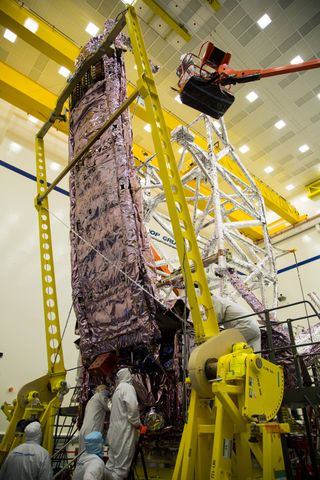 NASA's next-generation James Webb Space Telescope is really big. If you hadn't fully appreciated that basic fact, this new photo should do the trick.

The image shows technicians inspecting membranes of Webb's sun shield, apparently as part of an "acoustic test" designed to ensure that the telescope and its many subsystems can survive the rigors of launch a few years from now.

The sun shield absolutely dwarfs the workers, even though it's in a stowed configuration. When the sun shield deploys upon Webb's arrival at its deep-space destination — a gravitationally stable spot about 930,000 miles (1.5 million kilometers) from Earth — the shield will be about the size of a tennis court, mission team members have said. [Photo Tour: Building NASA's James Webb Space Telescope]

NASA regards the James Webb Space Telescope as Hubble's successor. The new telescope will perform a variety of observations, from studying some of the universe's first stars and galaxies to hunting for possible signs of life in the atmospheres of nearby exoplanets.

Webb is optimized to view the cosmos in infrared light, and its science instruments need to be kept quite cool. That explains the need for the giant sun shield, which "separates the observatory into a hot, sun-facing side (reaching temperatures close to 230 degrees Fahrenheit), and a cold side (approximately minus 400 degrees Fahrenheit)," NASA officials wrote Wednesday (July 18) in a description of the newly released photo.

NASA had been targeting an October 2018 launch for Webb until relatively recently. But a series of problems, including small tears in the sun shield, forced the agency to push the liftoff back to May 2020, and then again to March 2021.

These issues and the concomitant delays have also boosted the mission's development cost significantly, from $8 billion to $8.8 billion, NASA officials have said. Webb's estimated total life-cycle cost is now about $9.66 billion.