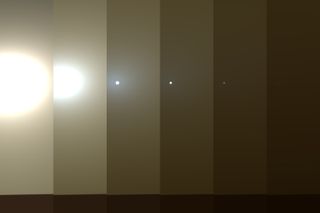 A series of images shows simulated views of a Martian dust storm as it blots out the sun, taken from the perspective of NASA's Opportunity rover. The left side begins with a blindingly bright midafternoon sky, then moves toward increasing opacity, with the right side simulating the rover's view in June 2018 during the storm.
(Image: © NASA/JPL-Caltech/TAMU)

The planet-encircling storm is expected to subside by the time InSight arrives in November. But it won't be a disaster for the new lander if the storm still swirls or if another one takes its place, officials said.

Even if the storm subsides as expected, a dusty haze will likely still hang in the Martian atmosphere when InSight arrives, said Richard Zurek, chief scientist of the Mars Program Office at JPL. That haze could affect how InSight's science instruments function, because it will prevent some sunlight from reaching the solar-powered lander. But touchdown should be fine, Zurek added.

Martian dust storms can pop up suddenly and last for weeks or even months. The current tempest contains several smaller, active dust storms and appears to have been triggered by a single local storm first observed at the end of May.

Previous NASA Mars missions have dealt with such storms or observed them up close.

When NASA's Mariner 9 spacecraft reached Mars in November 1971, for example, it caught sight of a global dust storm that had been raging for several weeks. This was the second major storm of the year, researchers knew, because they had observed the first from Earth before the spacecraft's Red Planet arrival. The Mariner 9 storm was huge and dramatic; it covered the entire Martian surface in dust, except the peaks of the tallest volcanoes.

Another major dust storm, comparable in size to the current one, raged across Mars when NASA's Viking mission arrived in 1976. That, too, was the second global storm that year. [Viking 1: The Historic First Mars Landing in Pictures]

Landing in a storm

If the storm lasts for its maximum estimated duration, it should falL off just before InSight arrives, NASA officials have said. But it will likely leave traces in the Red Planet's air regardless.

From an EDL standpoint, the biggest impact of the storm will be the way air is distributed in the Martian atmosphere, Grover said. During storms, dust heats the upper atmosphere, while the shaded lower atmosphere gets cooler. From the beginning of the InSight project, atmospheric modelers have provided a range of conditions that the lander might fly through during its critical EDL sequence, including dust storms, Grover said.

InSight will deploy a big parachute to slow down in the Martian atmosphere, then wrap up its descent by firing retro-rockets when close to the ground. A dusty atmosphere might require the parachute to be deployed as much as 0.9 miles (1.5 kilometers) lower than it would be in clear skies, Grover said. That would shave about 20 seconds off the 6.5-minute entry-to-landing timeline, he added.

When the parachute deploys, the suddenly slowed spacecraft will jerk backward, feeling what Grover called a "snatch force." The goal is to keep that force under 15,000 lbs. (6,800 kilograms), he said. The amount of force is related to atmospheric density, which changes during or after a dust storm.

"We can tune how we're actually going to fly on landing day," Grover said. Minor changes could be sent to the spacecraft as soon as 2 hours before the landing, allowing the team to make adjustments based on the weather closer to the planet.

InSight also boasts an extra 0.2 inches (0.5 centimeters) of thermal protection on its heat shield, because a dust-thickened atmosphere generates more heat than clear skies do.

Like previous NASA Mars missions, InSight — which launched in early May — will use radar to assist with its landing. Ten minutes before it enters the atmosphere, the spacecraft will link with Earth to update its position and velocity based on radar observations. As it plunges into the (likely dusty) Martian atmosphere, InSight will rely on an inertial measurement unit (IMU), which uses an accelerometer and gyros to figure out the craft's position as it flies through the atmosphere. The radar will then provide critical updates on the spacecraft's altitude so that the lander knows where it is in relation to the ground.

"We can't land successfully without the radar," Grover said. This radar is capable of seeing through dust, allowing the mission to land safely even in a storm, he stressed.

Things will be different, by the way, for NASA's Mars 2020 rover mission, which will rely on Terrain-Relative Navigation. Mars 2020 will use a camera to create a map of the landing site, comparing the landmarks in the images to those found on the craft's onboard map. This new technology will allow the spacecraft to shift its direction to avoid landing on dangerous objects. Grover said that a dust storm would impede the device, making a safe landing a challenge. But, unlike InSight, Mars 2020 won't arrive during dust-storm season. [NASA's Mars Rover 2020 Mission in Pictures (Gallery)]

Dust could affect InSight's scientific work, because the lander relies on solar panels to power its instruments.

A new dust storm could affect "the deployment of instruments from this solar-powered platform," Zurek said. The dust could also cover the panels after the instruments have been deployed.

"That's the main worry, that the dust storm is going to cover your solar panels," said Matt Siegler, a research scientist at the Planetary Science Institute in Arizona who works on InSight's heat-probe instrument.

The problem is similar to the one NASA's solar-powered Opportunity rover currently faces. The nearly 15-year old Opportunity has hunkered down during the global storm, likely entering a "low-power fault mode," in which all subsystems other than the mission clock turn off. The mission clock is programmed to wake the computer to check its power levels.

The massive dust storm has blotted out the sun, keeping Opportunity from charging its batteries. The batteries don't just run the instruments; they also keep the rover warm during the cold Martian nights. Without such heat, big problems can arise.

"Some soldered joint will get too cold and split, and then your computer dies," Siegler said.

The dust storm itself could help keep Opportunity warm, because dust can trap heat close to the planet's surface. Indeed, calculations by the Opportunity team suggest that temperatures won't get cold enoughin the immediate future to freeze that rover out, NASA officials said last month.

When InSight lands, it should have enough power to keep its instruments warm for some time, Zurek said. Once the storm passes and the skies clear somewhat, the spacecraft will be able to begin its mission exploring the Martian interior.

In the meantime, scientists will keep their eyes on the enormous weather event.

"The current storm is still developing, and atmospheric scientists here at JPL are continuing to observe it," Grover said.