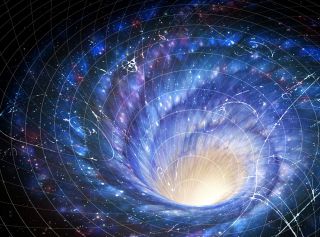 Massive objects, such as galaxies, warp space-time, according to Einstein's theory of general relativity.
(Image: © University of Warwick)

General relativity, which the great physicist proposed in 1916, holds that gravity is a consequence of space-time's inherent flexibility: Massive objects distort the cosmic fabric, creating a sort of well around which other bodies orbit.

Like all scientific theories, general relativity makes testable predictions. One of the most important is the "equivalence principle" — the notion that all objects fall in the same way, no matter how big they are or what they're made of. [Einstein's Theory of Relativity Explained (Infographic)]

Researchers have confirmed the equivalence principle many times on Earth — and, famously, on the moon. In 1971, Apollo 15 astronaut David Scott dropped a feather and a hammer simultaneously; the two hit the gray lunar dirt at the same time. (On Earth, of course, the feather would flutter to the ground much later than the hammer, having been held up by our atmosphere.)

But it's tough to know if the equivalence principle applies in all situations — when the objects involved are incredibly dense or massive, for example. This wiggle room has given hope to adherents of alternative gravity theories, though such folks remain in the minority.

The new study could take some of the air out of their optimism. An international team of astronomers tested the equivalence principle under extreme conditions: a system composed of two superdense stellar corpses known as white dwarfs and an even denser neutron star.

The neutron star is a fast-spinning type known as a pulsar. These exotic objects are so named because they seem to emit radiation in regular pulses. This is just an observer effect, however; pulsars blast out radiation continuously, from their poles, but astronomers' instruments pick these beams up only when they're directed at Earth. And because pulsars spin, they can direct their poles toward Earth at regular intervals.

The system in question, known as PSR J0337+1715, is located 4,200 light-years from Earth, in the direction of the constellation Taurus. The pulsar, which rotates 366 times per second, co-orbits on the interior with one of the white dwarfs; the pair circles a common center of mass every 1.6 Earth days. This duo is in a 327-day orbit with the other white dwarf, which lies much farther away.

The pulsar packs 1.4 times the sun's mass into a sphere the size of Amsterdam, whereas the interior white dwarf harbors just 0.2 solar masses and is about the size of Earth. So, they're very different objects — but they should be pulled by the outer white dwarf in the same way if the equivalence principle is on the money.

The researchers tracked the pulsar's movements by monitoring its radio-wave emissions. They did this for six years, using the Westerbork Synthesis Radio Telescope in the Netherlands, the Green Bank Telescope in West Virginia and the Arecibo Observatory in Puerto Rico.

"We can account for every single pulse of the neutron star since we began our observations," study leader Anne Archibald, a postdoctoral researcher at the University of Amsterdam and the Netherlands Institute for Radio Astronomy, said in a statement. "And we can tell its location to within a few hundred meters. That is a really precise track of where the neutron star has been and where it is going."

A violation of the equivalence principle would manifest as a distortion in the pulsar's orbit — a difference between the neutron star's path and that of its interior white-dwarf companion. This distortion would cause the pulsar radiation to arrive at a slightly different time than expected.

But the researchers didn't detect any such distortion.

"If there is a difference, it is no more than 3 parts in a million," co-author Nina Gusinskaia, a doctoral student at the University of Amsterdam, said in the same statement.

"Now, anyone with an alternative theory of gravity has an even narrower range of possibilities that their theory has to fit into in order to match what we have seen," Gusinskaia added. "Also, we have improved on the accuracy of the best previous test of gravity, both within the solar system and with other pulsars, by a factor of about 10."

The new study was published online today (July 4) in the journal Nature.