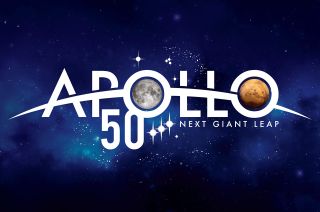 NASA’s official logo for the 50th anniversary of the Apollo program.
(Image: © NASA)

NASA has taken "one small step" towards celebrating its history, while also promoting its next "giant leap."

The space agency on Friday (June 1) unveiled its logo for the 50th anniversary of the Apollo Program. From October 2018 through December 2022, NASA will celebrate a half century since astronauts journeyed to the moon.

Over the same four years, NASA will continue its push to return astronauts to the lunar surface and, ultimately, send crews to Mars. [Moon Memories: Thousands of Apollo Photos Released Online]

"The logo offers a nod to the past with a few elements borrowed from the original program emblem, and a glimpse into the future with a graphic depiction of NASA's vision for the next half-century of deep space exploration," NASA described on its website.

The original Apollo Program insignia, dating back to the early 1960s, bore a large letter "A" with the constellation Orion oriented so that its three central stars formed the bar crossing the letter. To the right of the "A" was an illustration of Earth and to the left the moon. A double trajectory passed behind both spheres and through the central stars.

For the new 50th anniversary logo, images of the moon and Mars fill both "O"s in the word "Apollo" and "Next Giant Leap" appears below. The latter phrase borrows from the words spoken by Apollo 11 astronaut Neil Armstrong upon his first "small step" onto the lunar surface.

"Today, NASA is working to return astronauts to the moon to test technologies and techniques for the next giant leaps," explained the space agency.

According to NASA, the original Apollo Program emblem was a composite design derived from the ideas of its employees and contractor workforce.

As a nod to them, and the more than 400,000 people who worked on the missions that launched between 1968 and 1972, the new Apollo 50th anniversary logo also incorporates Orion's stars.

"The three central stars are repositioned diagonally beside "50" to emphasize the many sacrifices made in pursuit of the lunar goal — especially the lives of Apollo 1 astronauts Virgil "Gus" Grissom, Ed White and Roger Chaffee who perished in a capsule fire during a test on the launch pad in January 1967," stated NASA.

The new logo replaces the stars crossing the "A" with an arc that extends through the full word "Apollo." The white arc — which is reminiscent of a similar element in the logo for NASA's 60th anniversary introduced earlier this year — represents the horizon, or Earth's limb, as seen from a spacecraft.

"It serves as a reminder of how the first views of Earth from the moon — one of NASA's crowning achievements — forever transformed the way we see ourselves as human beings," the agency stated. "It also affirms NASA's intention to continue pushing the boundaries of knowledge and delivering on the promise of American ingenuity and leadership in space."

Created by NASA graphic artist Matthew Skeins, the Apollo 50th anniversary logo is set against a blue nebula, acknowledging the distant vistas where humans may someday travel, and confirming that NASA is already working toward that goal.