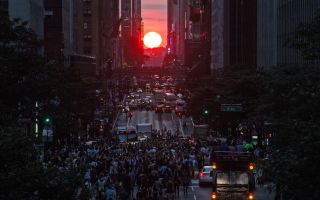 Sunsets in New York City can be spectacular, but during certain days in May and July, the alignment of Earth and the sun creates an unusually striking phenomenon known as "Manhattanhenge," when the setting sun lines up within the grid layout of the city streets.

On these special days, the sun's descent follows a path that aligns precisely with the exact center of Manhattan numbered streets that run from east to west. As the sun sets, its rays illuminate the asphalt and the buildings that line these streets with a glowing beacon of golden light.

The event that is Manhattanhenge occurs because of urban design — streets set at 90 degree angles — juxtaposed with the timing of Earth's orbit and rotation as the planet travels around the sun. But will the city grid and the setting sun always line up so perfectly? Are there any factors — cosmic or otherwise — that could disrupt the perfect Manhattanhenge alignment? [Manhattanhenge: Facts About NYC's Special Sunsets]

Manhattanhenge — a term coined by astrophysicist and New Yorker Neil deGrasse Tyson in 2001 — takes place on days that frame the summer solstice. It happens four times on two paired dates at the end of May and mid-July; twice with the half-set sun lining up in the exact center of the "canyons" between buildings, and twice with the full circle of the sun touching down in alignment with the city grid.

Manhattanhenge hinges on two factors: the orientation of the city grid and the exact position of Earth relative to the sun based on its orbital path, rotation and tilt. When the timing is just right, a minute of sunset is visible simultaneously at the center of the city's east- and west-facing streets, said astrophysicist Jackie Faherty, a senior scientist and educator at AMNH.

Other gridded cities such as Toronto and Chicago also experience this sunset alignment effect, though on different days than those of Manhattanhenge. But Manhattanhenge's stunning visual impact is due in part to the expanse of the Hudson River and the relatively low buildings on the New Jersey shoreline, which make for an unobstructed view of the sun as it drops to the horizon in the west for "the grid kiss," Faherty told Live Science.

"If all of a sudden there was a big construction boom on the Jersey side, then we'd start to have problems with our view of Manhattanhenge, because you would have buildings that are blocking the moment of sunset," Faherty said. [Manhattanhenge Images Reveal Stunning NYC Sunsets]

Manhattanhenge's alignment only happens on certain dates because the exact position of the rising and setting sun on the horizon is slightly different every day — the result of Earth being tilted on its axis by 23.5 degrees in its orbital plane, Faherty said. But in addition to Manhattanhenge, the nearly setting sun is visible between the city's cross streets during a range of dates bracketing the summer solstice (falling on June 21 this year), with the so-called "Manhattanhenge Effect" lasting from the first sunset grid kiss in May until the last one in July.

Between May 29 and the summer solstice, the sun is still visible at the center of the city's cross streets, hitting the "sweet spot" just a little higher each day. After the summer solstice, "when the Northern Hemisphere starts to tilt away from the sun," the same thing happens in reverse, with the sun hitting the center of the grid a little lower each day "until the second grid kiss in July, when it's the last time the sun makes it that far north," Faherty said.

However, if Earth were to suddenly tip over even farther on its axis — perhaps following a massive cosmic collision — that would jar the alignment enough to end Manhattanhenge forever.

"It would have to knock us pretty far, though, for it to not happen in Manhattan at all," Faherty said.

Such a devastating impact would cause a host of more immediate concerns than the loss of Manhattanhenge. But luckily, the chances of such an Earth-changing event actually taking place are pretty slim, she said.

"Earth is pretty stable in its orbit, so as far as current humanity goes, we're not losing that anytime soon. No one who's reading this is going to lose the grid kiss unless something catastrophic happens to the Earth, and I don't see anything like that on the horizon."