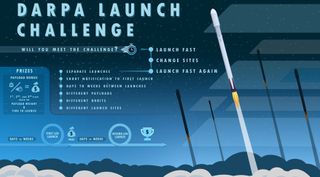 The DARPA Launch Challenge will offer prizes for companies what are able to launch small satellites on short notice from two different sites.
(Image: © DARPA)

COLORADO SPRINGS — The Defense Advanced Research Projects Agency announced a prize competition April 18 to demonstrate the ability to rapidly launch small satellites, a competition whose regulatory challenges may tower over its technical ones.

The DARPA Launch Challenge, formally announced at the 34th Space Symposium here but previewed at a February conference, will offer a top prize of $10 million to the team whose vehicle is able to perform two launches of small satellites, from two different sites, on short notice.

As currently envisioned, the competition will have teams perform a first launch in late 2019. The location of the launch site will be announced only weeks in advance, and teams will have only days to integrate and launch the DARPA-provided payload. [Military Space: Spacecraft, Weapons and Tech]

Each team that successfully carries out that initial launch will receive $2 million and will be eligible for a second launch at a different site, again on short notice. DARPA will then award prizes based on a combination of time to launch, mass launched and orbital accuracy. The exact scoring process using those factors is still being developed, Todd Master, program manager for the competition, said in a briefing here.

The competition emerged from discussions DARPA had with the growing number of companies developing small launch vehicles. "We asked them what DARPA could do to help them be successful," said Fred Kennedy, director of DARPA's Tactical Technology Office, during a panel session at the symposium where he announced the challenge.

"We wanted to have them be successful not simply individually, but as a nascent industry to enable a new community of space access service providers, to remove the launch bottleneck and finally allow us to really fulfill the promise of the space domain," he said.

What emerged from the feedback DARPA received was a prize competition to enable a responsive launch capability. "Our goal is nothing short of a fully realized 21st century launch capability," he said, with multiple vehicles and launch sites that can launch on short notice and at low prices.

While such a competition has obvious technical hurdles associated with launching payloads into orbit on short notice, companies will also face significant regulatory issues. Teams will require commercial launch licenses from the Federal Aviation Administration, which are typically tied to a single launch site. While the National Space Council endorsed plans to reform the licensing process  at its February meeting, companies could have to seek licenses for multiple sites, without knowing if they will need to launch from them as part of the competition.

Master said that regulatory reform will be a part of the competition. "Even to do the things we want to do in the challenge, we're starting to stress the FAA process," he said.

He said DARPA is working with FAA on some ways to provide a blanket launch license for competitors that covers launches from several sites, rather than one specific to a launch site and trajectory. "A big impact we're trying to make is improvements in that regulatory process so that we can all go faster."

DARPA will provide more details about the competition at an industry day May 23 in Los Angeles.