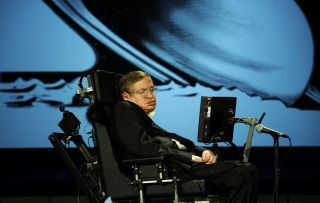 Stephen Hawking may have been a world-renowned genius, but he didn't take himself too seriously.

Hawking, who died March 14 at the age of 76, "enjoyed being treated irreverently," theoretical physicist John Preskill wrote in a tribute to the late cosmologist that was published online today (April 12) in the journal Science.

"In the middle of a scientific discussion, I could interject, 'And what makes you so sure of that, Mr. Know-It-All?' knowing that Stephen would respond with his eyes twinkling: 'Wanna bet?'" wrote Preskill, who's based at the California Institute of Technology in Pasadena. [Stephen Hawking: A Physics Icon Remembered in Photos]

And Hawking did indeed like to bet, often placing wagers on scientific questions with Preskill and fellow physicist Kip Thorne (who shared the 2017 Nobel Prize in physics for his role in the first-ever direct detection of gravitational waves).

The most famous of these bets, struck in February 1997, concerned whether black holes obliterate everything that they gobble up. Hawking and Thorne wagered "yes," whereas Preskill bet that physical information — the properties that define an individual particle, for example — can survive in a black hole's heart. The stakes? An encyclopedia of the winner's choice.

Hawking conceded the bet in 2004. He presented Preskill with a copy of "Total Baseball: The Ultimate Baseball Encyclopedia" in Dublin, in front of hundreds of scientists and dozens of reporters.

"You can't buy one of those in Ireland, so Stephen's assistant had arranged to have it shipped overnight," Preskill wrote in the Science tribute. "Not knowing what else to do, I held the book over my head as though I had just won the Wimbledon final, while what seemed like a million flashbulbs popped to record the moment."

In the new piece, Preskill also highlighted Hawking's greatest scientific accomplishments, some of which have transformed our understanding of the universe. For example, Hawking's early work showed that time had a beginning — "that the laws of physics as we now understand them must have broken down very early in the history of the universe, at the Big Bang," Preskill wrote.

Hawking also demonstrated that black holes aren't entirely black; they actually emit radiation very slowly and will therefore eventually evaporate, given enough time. This research, which Hawking published in 1974, "shook the world of physics," Preskill wrote. "A major milestone in the history of science, the theory of Hawking radiation established a profound connection among gravitation, quantum physics, and information science, which still guides the ongoing search for a more complete theory of quantum gravity."

(Hawking's work in this area was inspired in part by theoretical physicist Jacob Bekenstein, who, in the early 1970s, proposed that a black hole's entropy, or disorder, is linked to the surface area of its "event horizon," the point beyond which nothing can escape. Hawking was initially skeptical of this idea, but his calculations showed that Bekenstein was right. That's why "Hawking radiation" is also known as "Hawking-Bekenstein radiation.")

Hawking also brought cosmology to the masses in a series of best-selling books, including "A Brief History of Time" and "The Universe in a Nutshell." And he accomplished all of this while living with Lou Gehrig's disease (also known as amyotrophic lateral sclerosis, or ALS), which robbed Hawking of most of his motor function over the years. For the last decade of his life, Hawking communicated by twitching a single cheek muscle, whose movements were picked up by a special sensor.

Hawking's "courage and high spirits in the face of his disability inspired millions," Preskill wrote, adding that the physicist deserved the fame that came his way. "Combining extraordinary depth of thought with an irrepressible sense of play — that's what I'll remember best about Stephen Hawking."