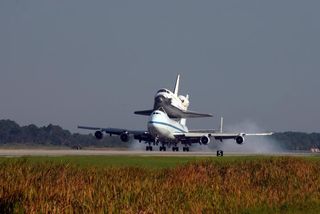 After a three-day trip from California, the shuttle carrier aircraft, or SCA, and its piggyback passenger Atlantis kick up dust at landing on the KSC Shuttle Landing Facility runway on July 2, 2007.
(Image: © NASA/Ken Thornsley.)

A modified Boeing 747 withthe shuttle mounted on its back toucheddown on the shuttle landing strip around 8:25 a.m. EDT (1225 GMT) aftertaking off from a refueling stop in Kentucky.

The jet made several stopson its cross-country trip. On Monday, it landed in Fort Campbell, Ky., afterstops at Offutt Air Force Base in Nebraska and Amarillo, Texas.

Atlantis, carrying sevenastronauts, landedJune 22 at Edwards Air Force Base in California after a 14-dayconstruction mission at the international space station.

Bad weather at the Floridalaunch site forced NASA to divert to the shuttle's alternate landing site inCalifornia. NASA prefers to land shuttles in Florida to avoid the more than$1.7 million price tag to transport them back.

The vehicle will be cleanedand refurbished before being readied for its next trip, scheduled for December.The next scheduled mission will send Endeavourto the space station on Aug. 7.