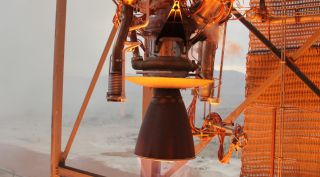 WASHINGTON — Blue Origin quietly changed the design of its New Glenn rocket around the beginning of the year in order to hold to a 2020 first launch and increase the range of orbital missions the rocket can complete.

Although the company's website still shows New Glenn with a second stage powered by a reignitable version of the BE-4 it is developing to power the main stage of both New Glenn and United Launch Alliance's Vulcan rocket, that configuration is now out of date.

"We've already flown BE-3s, and we were already in the development program for BE-3U as the third stage for New Glenn," said Clay Mowry, Blue Origin's vice president of sales, marketing and customer experience. "It made a lot of sense for us to switch to an architecture where we get there faster for first flight."

The BE-3U is the upper stage variant of the liquid hydrogen-fueled BE-3 engine that has powered Blue Origin's reusable New Shepard spacecraft on seven suborbital test flights since its 2015 debut.

Mowry said switching to the BE-3U for New Glenn's second stage will allow Blue Origin to conduct the rocket's first launch in the fourth quarter of 2020. He declined to say how much time the engine change saves compared to the original configuration.

Blue Origin is developing two versions of New Glenn: a two-stage version designed to launch a wide range of satellites and a three-stage version for more demanding launches such as deep space missions.

Before making the change, Blue Origin intended to power the second stage of both versions with a single BE-4U engine. Now the company plans to forgo BE-4U development and rely instead on a pair of BE-3U engines to power the New Glenn second stage.

The design change, which Mowry said was made a few months ago, means Blue Origin only needs two types of engines for New Glenn instead of three.

Blue Origin declined to give the expected lift capability of the revised New Glenn configurations. Mowry said the liquid hydrogen-fueled BE-3 has a higher specific impulse, making it more efficient than the BE-4, which runs on methane and liquid oxygen. The BE-3 can produce 110,000 pounds of thrust at sea level, compared to the BE-4's 550,000 pounds of thrust.

Blue Origin is already gaining early success in the commercial satellite launch sector, having secured eight missions with satellite operators around the world. But another motivation for tweaking New Glenn's design is to reach tricky orbits for national security customers.

Blue Origin is lining up New Glenn to compete with United Launch Alliance and SpaceX in launching U.S. military satellites by giving the rocket enough muscle to reach every orbit specified in the Launch Service Agreement (LSA) solicitation the U.S. Air Force issued last fall. The solicitation — which has also drawn interest from Orbital ATK and Aerojet Rocketdyne — specifies nine wide-ranging "reference orbits" the proposed launchers must be able to reach in order to qualify for Air Force funding.

The Air Force plans to help fund development of at least three launch system prototypes. Awards are expected in July.

"If you look at LSA and all those mission profiles, we can serve all of those with a single version of New Glenn with this two-stage architecture," Mowry said.

Blue Origin's pursuit of defense business positions the company as a future competitor to ULA, who Blue Origin would also like to supply with BE-4 engines to for its next-generation Vulcan launch vehicle. ULA is still deciding between Blue Origin's BE-4 and Aerojet Rocketdyne's AR1 for Vulcan's first stage.