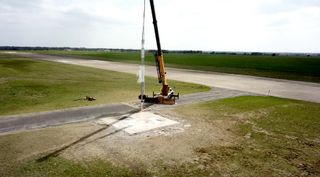 WASHINGTON — With a key test completed and a launch license in hand, Exos Aerospace is preparing for the first flight of its reusable suborbital rocket in April.

In a statement, the company said it completed a "hover test" of its Suborbital Autonomous Rocket with GuidancE, or SARGE, rocket at its Caddo Mills, Texas, facility March 17. In the test, the rocket, suspended from a crane, fired its engine to hover in place, demonstrating the performance of its propulsion, guidance, and other systems.

That test went as planned, said John Quinn, chief operating officer of Exos Aerospace. It also came a month after the company received a launch license from the Federal Aviation Administration's Office of Commercial Space Transportation, authorizing flights of SARGE from Spaceport America in New Mexico.

"We are excited to move two critical steps closer to launches at Spaceport America," Quinn said of the test and the FAA license.

With the successful test and the license, Exos is planning a first launch April 7 from Spaceport America, flying to an altitude of at least 80 kilometers. Preparations for the launch will begin in the week leading up to it, Quinn said, as the rocket and support personnel travel from Texas to New Mexico.

The rocket will be carrying payloads for customers, Quinn said, but did not disclose their names. One goal of the flight, he said, is to qualify to be a part of NASA's Flight Opportunities program, which contracts with several companies to fly suborbital research payloads. The program's current suborbital flight providers include Blue Origin, UP Aerospace and Virgin Galactic.

Exos is based on both technologies and people from Armadillo Aerospace, a company founded by video game developer John Carmack that competed for the Ansari X Prize for commercial human suborbital spaceflight in the early 2000s and later developed a series of suborbital vehicles, including an earlier version of the SARGE vehicle.

Carmack put Armadillo into what he called "hibernation" in 2013 after a flight of that predecessor vehicle, known as STIG-B, early that year. He said at the time that he no longer planned to fund the company out his own pocket. Exos acquired what it called the "mission critical" assets of Armadillo in early 2015, and a number of former Armadillo employees joined Exos.

Exos hopes to use SARGE to tap into what it believes to be significant demand for suborbital research, while also testing technology that could be used for a future orbital launch vehicle. "We look forward to enabling space research, manufacturing and educational opportunity for the world by providing frequent flights that provide fast and affordable access to space," Quinn said.