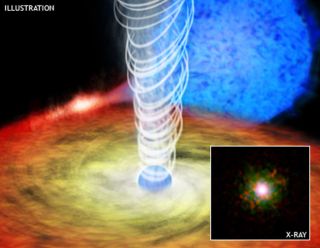 Black holesare not the only objects in the universe that spew powerful jets from theirpoles. Dead, smoldering stars can emit them, too, and the jets they createrival and might even surpass those fired by black holes, scientists find.

Thediscovery, to be detailed in an upcoming issue of The Astrophysical JournalLetters, shows that the unusual properties of black holes?like the presenceof an event horizon and the lack of an actual surface?are not required for jetsto form.

?Gravityappears to be the key to creating these jets, not some trick of the eventhorizon,? said study leader Sebastian Heinz of the University of Wisconsin at Madison.

UsingNASA?s Chandra X-ray Observatory, scientists spotted the jet 20,000 light-yearsfrom Earth in Circinus X-1, a system where a spinning stellar corpse known as aneutronstar is orbiting a normal star several times the mass of the sun. A neutronstar forms when the material left over from a supernova explosion collapsesinto a dense core.

Many jetshave been found near black holes, but the CircinusX-1 jet is the first extended X-ray jet associated with a neutron star.

Heinz andhis colleagues estimate that a surprisingly high percentage of the energycreated by material falling onto the neutron star is used to power the jet.

?In termsof energy efficiency across the universe, this result shows that neutron starsare near the top of the list. This jet is almost as efficient as one from ablack hole,? said study team member Norbert Schulz of the MassachusettsInstitute of Technology.

The Chandrafindings also help clear up a mystery about how diffuse lobes ofradio-emitting gas around Circinus X-1 are created. The researchers found theX-ray jets of high-energy particles spewed by the system?s neutron star arepowerful enough to maintain the lobes.

?We?ve seenenormous radio clouds around supermassive black holes at the centers ofgalaxies,? Heinz said. ?What?s unusual here is that this pocket-sized version,relatively speaking, is being powered by a neutron star, not a black hole.?

Heinz andhis team spotted two extended features shaped like a ?V? in the Chandraobservations of Circinus X-1 that they speculate could represent the outerwalls of a wide jet. Another possibility is that the features represent twoseparate, narrow jets fired at different times as the neutron star wobblesto and fro in space like a spinning top.

If thissecond scenario is correct, Circinus X-1 would have one of the longest,narrowest jets found to date, surpassing even those discovered around blackholes.