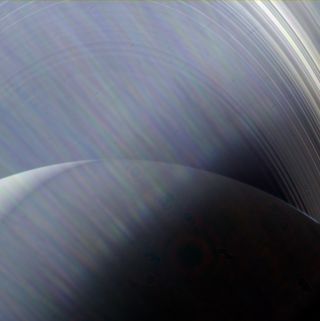 The Cassini spacecraft grabbed this view of Saturn and its rings through a haze of sun glare on June 23, 2013, when the spacecraft was approximately 491,200 miles (790,500 kilometers) from the ringed planet.
(Image: © NASA/JPL-Caltech/Space Science Institute)

Saturn and its rings shine through the sun's glare across the Cassini spacecraft's wide-angle camera in a newly released photo from the planetary mission.

The Cassini spacecraft, a cooperative project of NASA, the European Space Agency and the Italian Space Agency, completed its mission in September 2017 with a dramatic dive into Saturn's atmosphere. It snapped this photo back in 2013, flying approximately 491,200 miles (790,500 kilometers) from the planet.

"In this image, NASA's Cassini sees Saturn and its rings through a haze of sun glare on the camera lens," NASA officials said in a statement yesterday (March 5). "If you could travel to Saturn in person and look out the window of your spacecraft when the sun was at a certain angle, you might see a view very similar to this one."

Now that Cassini is gone, NASA's next best look at the Saturn system could be close-ups of its intriguing moons in the 2020s: in December, NASA funded the next stage of development for a flying, eight-legged drone to explore the surface of Saturn's largest moon, Titan, and funded continued work on a probe to search for life signatures at Saturn's icy moon Enceladus.