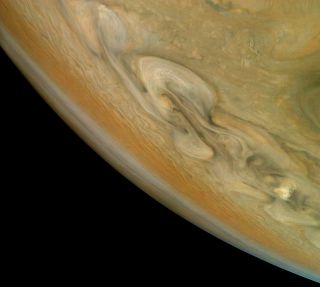 Juno snapped the picture with its JunoCam imager on Dec. 16, 2017, during the probe's most recent close flyby of the gas giant. Juno is orbiting Jupiter on a highly elliptical path and makes one such close approach every 54.5 Earth days.

When Juno took the picture, the probe was about 5,460 miles (8,787 kilometers) above Jupiter's swirling cloud tops, NASA officials said. Though the orientation suggests the imaged region is in Jupiter's south, the photo actually depicts an area at about 38 degrees north latitude. [More Spectacular Jupiter Photos by Juno and Citizen-Scientists]

The new photo is a color-enhanced version processed by citizen scientist Björn Jónsson.

"This image has been processed from the raw JunoCam framelets by removing the effects of global illumination," NASA officials wrote in a description of the image, which was released Thursday (Jan. 25). "Jónsson then increased the contrast and color and sharpened small-scale features. The image has also been cropped."

NASA and the Juno team encourage anyone to process JunoCam data into pictures like this one. If you're interested, go to www.missionjuno.swri.edu/junocam.

The $1.1 billion Juno mission launched in August 2011 and arrived at Jupiter on July 4, 2016. The spacecraft is studying Jupiter's structure, composition, and gravitational and magnetic fields, gathering data that should help scientists better understand how the giant planet, and the solar system in general, came together.