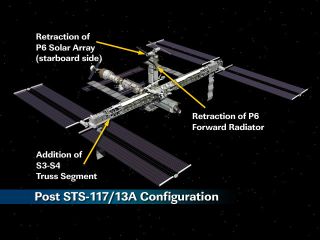 Atlantis shuttle astronauts Patrick Forrester and Steven Swanson will don their NASA spacesuits and begin a planned 6.5-hour spacewalk outside the ISS at 2:03 p.m. EDT (1803 GMT).

The top task of their spacewalk, the second of four planned for NASA's STS-117 mission to the ISS, is clearing the way for the station's newly unfurled starboard solar arrays to rotate and track the Sun.

To do that, Swanson and Forrester will help repack a solar wing reaching out to starboard from the station's mast-like Port 6 (P6) truss into its storage boxes. They are also expected to loose a multitude of restraints and bolts on a massive rotational joint that bridges newly-installed Starboard 3 (S3) and Starboard 4 (S4) trusses and is designed to rotate its outboard solar arrays and segments.

"We're definitely ready for what we know is going to be coming up," STS-117 spacewalker Danny Olivas told CBS News late Tuesday during interviews on NASA TV. "We're also prepared that, if we run into something, that we'll have a good stopping point."

Olivas and his spacewalking partner Jim Reilly II are also trained to help stow the P6 array, should its retraction carry over into a later spacewalk on Friday, to free Forrester and Swanson for other orbital work of their own.

The starboard-reaching P6 array, designated as P6-2B, has stretched out from its parent truss since it first unfurled during NASA's STS-97 mission in 2000. Like all of the U.S.-built solar arrays powering the ISS, the 115-foot (35-meter) wing is made up of two panels, or blankets, and a 31-section mast.

But the P6 solar arrays are the only ones at the ISS due for relocation from their temporary setup, rising above the station's central hub, to the port-most edge of the orbital laboratory during a future shuttle mission.

Astronauts stowed its partner array, P6-2A, during NASA's last shuttle flight in December 2006 to prepare for that planned move, but not without a fight.

"Last mission, what we had planned to do was to send a command to retract the arrays and watch it fold into their blanket boxes," Mike Suffredini, NASA's ISS program manager, said Tuesday. "Which it did not do."

Instead, some of the solar array's pleats failed to fold properly, forcing astronauts to abort efforts to remotely retract it. Ultimately, spacewalkers had to shake the array and manually free stuck panels, guide wires and grommets using a set of modified tools wrapped in translucent orange Kapton tape to ease the solar wing into its containers.

For today's spacewalk, mission managers have drawn up a new plan based on those proven techniques.

Hours before the spacewalk begins, ISS flight controllers on Earth will slowly retract the solar array by one-half of a mast section, or bay, to help ease forces on the power-producing wing.

"And then, one bay at a time, we're going to retract this thing and give this whole array a chance to settle on its own," Suffredini said.

If the P6 array needs some coaxing from spacewalking astronauts, Forrester and Swanson will take the tape-wrapped tools they need with them when they exit the station's Quest airlock and spend about 45 minutes of their orbital work on the folding solar wing.

In order for the space station's new starboard solar arrays to begin tracking the Sun, no more than 19 of the P6 mast bays can be left exposed. Only then will there be enough clearance for the turntable-like Solar Array Rotary Joint (SARJ) between the S3 and S4 truss to begin rotating the new solar wings like a paddlewheel as the station orbits the Earth.

Forrester and Swanson will spend the bulk of their spacewalk setting up brace beams for the SARJ and releasing the many locks and restraints that secured the massive joint inside Atlantis' payload bay. Once those are removed and the P6 array clear, the new S3/S4 solar arrays will be primed for full operations.

"We're optimistic," Suffredini said going into today's spacewalk. "Some of us think our chances are pretty good."