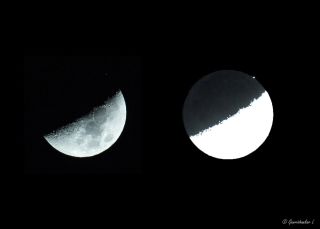 An image of the star Aldebaran near the limb of the moon. On the right, the brightness is turned up to make the star visible.
(Image: © Gowrishankar L.)

The last of this year's series of occultations of the star Aldebaran by the moon is set for Saturday, Dec. 30.

The final "vanishing act" of this bright orange star favors the Middle Atlantic and northeastern United States as well as the eastern third of Canada. In these regions, the star will disappear in a dark sky or during late (nautical) twilight, with the sun at least 12 degrees below the horizon.

As one heads farther to the west and south, the sky will become progressively brighter at the time of the occultation. The central U.S. down to the Gulf Coast will be bathed in bright twilight. For all points west of a line running roughly from eastern Montana southeast to the Texas/Louisiana border, the sun will be above the horizon and it will still be daytime when the occultation takes place (making Aldebaran invisible). [Best Night Sky Events of January 2018 (Stargazing Maps)]

The moon can hide four first-magnitude stars, and Aldebaran, the star marking the angry right eye of Taurus, the Bull, is the brightest of the four.

The moon will be about 2.5 days before full and 92 percent sunlit during this occultation. For easterners, the natural satellite will be at least one-third of the way up from the eastern horizon to the overhead point (the zenith).

For those in the occultation zone, Aldebaran will disappear behind the dark, unilluminated part of the lunar disk — an event that can be glimpsed with the unaided eye but can be much better appreciated through binoculars or a telescope. The emergence of the star will occur about 50 minutes later — give or take about 10 minutes depending on your location — on the bright side of the moon, an effect that can be observed only with optical aid.

In the table below, we list 10 selected cities and local standard times to the nearest minute for when Aldebaran will wink out behind the dark lunar sliver and reappear from behind the moon's bright limb.

An asterisk ( * ) indicates that evening twilight is still in progress.

The International Occultation Timing Association (IOTA) has a web page that provides a viewing schedule for the Dec. 30 occultation at nearly 1,500 locations, including many in the United States and Canada. You can find it here: http://www.lunar-occultations.com/iota/bstar/1230zc692.htm.

So, if you're in the City of Brotherly Love, get ready to watch Aldebaran wink out behind the dark limb of the moon at around 6:22 p.m. And be prepared to watch the star pop back into view on the opposite (bright) side of the moon some 50 minutes later, at 7:12 p.m.

Of much greater interest is what will happen over central Florida, where the star will be just barely occulted behind the edge of the moon, along the line marking the southern limit of the area where the occultation will be visible. That southern line runs from Port Richey, Florida, near the Gulf coast northeast to the Atlantic Coast, to a point in Florida about midway between Daytona Beach Shores and Wilbur-by-the-Sea. This line is actually a path 2 or 3 miles (3 to 5 kilometers) wide, within which telescope users can see Aldebaran vanish and reappear several times as the mountainous limb of the moon glides by. Observers south of that path, such as in Tampa and Orlando, will see a near miss.

Because Aldebaran subtends an angle as large as 0.021 degrees, corresponding to 130 feet (40 meters) at the moon's distance, observers in the graze path may notice that some disappearances and reappearances take place gradually rather than instantaneously. Partial blinks or flashes are also possible when features at the lunar limb fail to completely hide the star.

In addition, IOTA's Brad Timerson has created an interactive Google map that depicts the graze path. You can view it here at: http://www.iota.timerson.net/ZC692_2017_Dec_31.htm.

And to augment his graze map, Timerson has calculated the times when the moon will apparently skim past the star. You'll need to know your precise latitude and longitude to get the specific times. The southern edge of the moon will sweep over Central Florida roughly between 6:23 and 6:26 p.m. EST. Go to: http://www.iota.timerson.net/Dec31_ZC692Times.txt.

For many readers, Saturday might be the last opportunity to see the moon hide Aldebaran for quite some time. The moon will occult Aldebaran during the dawn hours of July 10, 2018, but the zone of visibility for that event will be confined mainly to northern and central sections of Canada, though a small slice of the Northern Plains and western Great Lakes will also get a brief glimpse. See the map from the U.S. Naval Observatory here: http://asa.usno.navy.mil/static/files/2018/occns/occn.2018Jul10.Aldebaran.pdf.

After that, North Americans will have to wait until the next Aldebaran occultation series, which will not begin until the year 2033. There will, in fact, be a well-placed occultation of Aldebaran that will be visible across most of North America during convenient evening hours on March 24, 2034, a little over 16 years from now!

Joe Rao serves as an instructor and guest lecturer at New York's Hayden Planetarium. He writes about astronomy for Natural History magazine, the Farmer's Almanac and other publications, and he is also an on-camera meteorologist for Verizon Fios1 News in Rye Brook, N.Y.